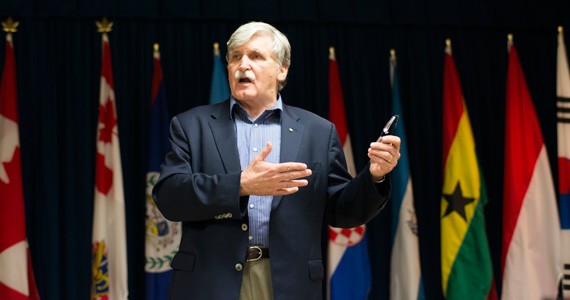 There are hundreds of thousands of child soldiers across the world. Roméo Dallaire wants Canadians to know those kids aren’t any different than our own children. The retired Lieutenant-general is speaking in Halifax this Tuesday at an event coordinated by his Roméo Dallaire Child Soldiers Initiative. His aim is to influence young people at home, and let them know that not so far away their peers are being unspeakably abused.

What will the upcoming talk cover?
We are talking about children who are being used as weapons of war. We’re talking about children who are increasingly being used, and abused, even though it’s now recognized as a crime against humanity to recruit children. We’re sensitizing youth in our nation, let alone internationally, that their peers are being used as tools of war by adults who are unscrupulously destroying them by the thousands.

Why are child soldiers used around the world so increasingly?
There’s an absolute laziness—I’m trying to find a word that describes adults who are not keen on fighting and they simply turn to kids because they can abduct them and indoctrinate them. They’re easy targets for bad guys.

And it’s not just boys, it’s young girls too?
Over 40 percent are girls. They’re more multitasked, because they use them so much more in all the logistics, the food, all that kind of stuff. On top of that, so many of them are abused—sex slaves and bush wives. Girls fill the full complement of horrors that you could imagine we could bestow upon a child in an armed group.

What is a security sector response and why is that a successful counter to this crime?
Everything we’ve been doing up until now has not in any way, shape or form reduced the abuse. These kids continue to be used, and all the effort has gone to picking up the pieces afterwards. That is to say, rehabilitation and reintegrating once their war is over. That has proven, although essential in reconstruction of a nation, it has not reduced the numbers being recruited—the fundamental reason why child soldiers exist. They exist because they’re a weapon-system that is easily acquirable. Why not start at the front end, prevent them from being recruited? And once they’re being used, find ways of making them ineffective without killing them. That is a security problem, not a socio-economical problem.

What can Canada do to help?
Well, Canada is in a very difficult position because to start with it was one of the leading countries in implementing the Optional Protocol on child rights, around the year 2000. They said nobody under 18 is to be recruited or used, and it’s a crime against humanity to do so. However, not long after that we had the case of Omar Khadr. We’ve proven totally inept at applying exactly what we’ve been telling everybody else to do. The people in these conflict zones are very much aware that Canada hasn’t even applied its own international convention that it’s asked everybody else to sign.

What about Canadians attending your talk, what do you hope they take away from it?
They can realize that we have an incredible respect and we hold in high regard our children. We have Amber Alerts and all kinds of laws to protect our children. But the children in these foreign countries are just as much children as ours. They’re no different. But they’re being abused. I think Canadians can engage well beyond our borders, particularly the young people.