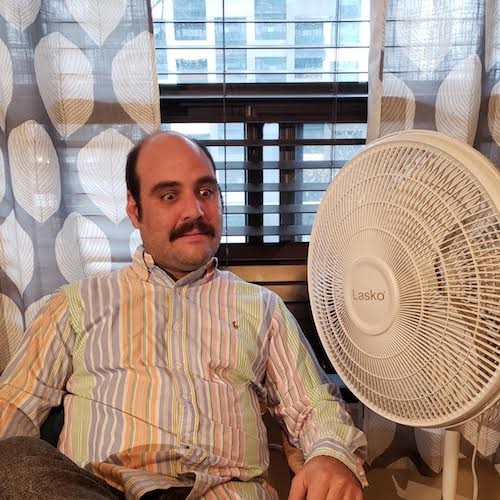 Chris Locke is a stand-up comedian, writer and actor based in Toronto. He performs absurd and self-deprecating material with a physical presence, inviting the audience to follow him with gestures and asides at the ends of lines that draw them into the path he is taking.

Even so, his self-assured delivery tells you that he’s going that way even if you aren’t following.

Here, in advance of two shows on Dec 20 at The Bus Stop Theatre (at 7pm and 9:30pm), we catch up with the laugh-bringer:

The Coast: How did you start doing stand-up? Where and when? Who influenced you?

Chris Locke: "The first time I tried stand up was August 1999 at an open mic in Toronto. I had just dropped out of Dalhousie University and my parents were pissed. I was a real bad boy! All I ever wanted was to be a silly bastard. I don’t remember making a conscious decision to go on stage—I just found myself up there. It instantly felt natural. At the time I was a mega fan of old Richard Pryor specials and Mr. Show with Bob And David."

TC: You are returning to Halifax for this show. What is your feel for the city? What kinds of jokes do you find go over well here?

CL: I love Halifax. Lots of crazy and fun memories here; partying at Dalhousie, Yuk Yuks, doing shows with all the Picnicface guys. I feel like the audiences likes the crazy stuff which is my forte if I do say so myself.

TC: You have opened shows recently for Sean Cullen. What is some good advice you've gotten from veteran comedians and performers?

CL: "I do look up to him as a master entertainer. He inspired me when I was younger: Following his silly, absurd instincts to hilarious ends and the audience is with him the whole time. Brent Butt gave me some savvy business advice. He is a very kind, funny, gregarious man. I do Andy Kindler’s show all the time at Just For Laughs and JFL42.That fills my heart with solid joy. Andy is a legend in the biz and is always fresh and hilarious."

TC: In addition to acting, you've worked as a writer on the Baroness von Sketch Show. How did you get on there as a writer?

CL: For Baroness I just submitted some sketches. I really wanted to work on Baroness because I love Aurora, Meredith, Carolyn, and Jenn. They are brilliant. It was extremely fun and inspiring. Most of my comedy friends have steady work behind the scenes on the comedy TV shows that you love and the even ones you hate!

TC: Anything else you want to say or share?

CL: "Just that I’m excited to be back and hope people come on out for a grand old time. I’ve had help stacking the show with great local acts thanks to improviser and Bus Stop Theatre regular, Stepheny Hunter, so I’m also excited to watch them as well. It’s going to be wild no matter what."