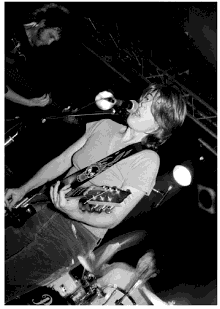 This is a tale told a thousand times but just in case . . .

Back in the early 1990s, with bands like Sloan, Plumtree, Thrush Hermit and jale, indie labels Cinnamon Toast Records and Murderecords, with Eric's Trip just over in Moncton, a brand-new alt-weekly newspaper (ahem!) and a growing annual music festival, almost everyone thought Halifax was becoming "the next Seattle." David Geffen and SubPop were sniffing around anyone wearing plaid with a guitar and bands were getting signed left and friggin' right. It didn't really last long, but the hype and the enormous output in that time created an enduring rock music legacy.

Riding the wave of the 'Halifax Explosion,' before The Inbreds shipped in from Ontario, and before a decided return to 'rock' a la Plaskett's Emergency, a trio of old-hat Halifax musicians re-assembled as Rebecca West in 1994. Fronted by Allison Outhit (earlier of Bubaiskull), with Lukas Pearse (bass wizard/sound extraordinaire) and PEI punk drummer Dale Hussey, the band's releases (Burners On and Six More Weeks of Winter) are emblematic of their time — hazy vocals, grungy style, with moments of punk, pop and art-rock.

Described in the music chronicle, Have Not Been The Same: The CanRock Renaissance 1985-1995, Rebecca West's 1995 debut record Burners On was the result of six years of Outhit's songwriting. Although Rebecca West had a "pop foundation, the band leaned more in the art rock direction." This aesthetic "set them apart from the rest of the Murderrecords roster." With Pearse on bass, who would "occasionally incorporate a steak knife for effect," the full trio was a complement to Outhit's "eclecticism." Winter was the height of the band's experimentalism.

Soon, the band members moved on to various projects and cities over the next 20 years (Outhit is now VP of Operations at FACTOR, Pearse is a local sound polymath, and Hussey still shreds), but on Thursday at ProSkates (9pm, free), Rebecca West plays again; live Halifax rock history.