Council approves roundabouts for use by road engineers 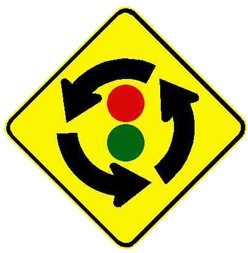 Regional council Tuesday committed Halifax to the brave new world of...roundabouts. Roundabouts have been ubiquitous in most the rest of the world for decades, if not centuries---and are recognized as a sensibly safe traffic control device, but North America is slow on the uptake. Only in the past few years have traffic engineers embraced roundabouts, and that usually conservative group now finds itself trying to convince the populace to accept a new traffic pattern. In Halifax, they’ve succeeded. On a unanimous vote, council gave engineers the go-ahead to put roundabouts in the regular toolbox of design practices brought to intersections. Three roundabouts are being built on the new Larry Uteck Drive in Clayton Park. As for older intersections, staff wants to rebuild the Devonshire-Novalea-Duffus intersection in the north end as a roundabout next year, a suggestion that’s resisted by nearby residents and the area’s councillor, Jerry Blumenthal. Three of the four intersections around the north Common have also been studied as possible roundabout sites, but no timeline has been established for rebuilding them. A Coast suggestion that public art be placed in the centre island of the new roundabouts---for example, a statue of a squeegee kid at the Willow Tree---was warmly approved of by several councillors, but not yet acted upon.