Athletic and graceful, circus arts took off in Halifax with the opening of Atlantic Cirque. Kevin Hartford reports on the past 10 years. 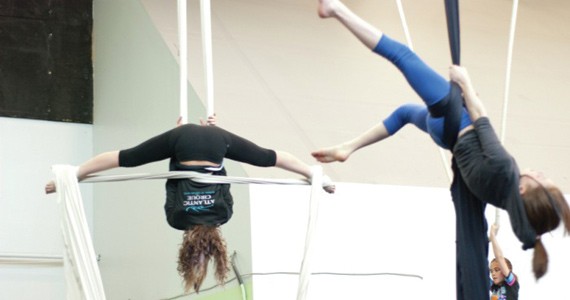 Athletic and graceful, circus arts took off in Halifax with the opening of Atlantic Cirque. Kevin Hartford reports on the past 10 years.

This year marks the first decade of Atlantic Cirque, a Dartmouth-based school that teaches the young and old alike to swing from a giant metal hoop, flip into the air from a trampoline and assemble themselves into a human pyramid.

The school's longevity can be credited to its president and owner, the Cirque de Soleil-trained, Quebec-born Anaïs Guimond, who came to Halifax in 2001 and saw a trapeze-shaped void in the Haligonian performing arts landscape. "I didn't know if Halifax was ready for a circus school, so I looked at it as taking a chance," she says. "I worked hard and hoped for the best and I'm so glad I did take that risk."

Guimond has been busy commuting from Halifax to Moncton, where Atlantic Cirque recently opened its second location. Not bad for a business that spent its first three years in the confines of the Shambhala Middle School gymnasium.

"It had a 16-foot ceiling," says Atlantic Cirque's head coach Caitlan Anthony. "Because it was a school gym, we had to take everything down every single night and reassemble it the next day. It was a bitch."

Atlantic Cirque's 3,500 square foot Burnside location offers classes, workshops and day camps under its 34-foot ceiling, as well as a one-year pre-professional program for those wishing to make circus arts a career.

Anthony says her bills get paid through performances alone, and Kristin Langille-Dahl, who began as a student at Atlantic Cirque in 2005, now teaches at its biggest competitor, Halifax Circus.

"Three of the people in my first class (at Atlantic Cirque) are doing circus professionally now," says Langille-Dahl, adding that if there's a rivalry between the two schools, it's a friendly one. "I'm so happy they're celebrating 10 years and I'm grateful to have gotten my start with them."

What began as 45 students in 2002 has grown into what Anthony estimates as 200 participants a week.

Joining Atlantic Cirque as a student in 2003, Anthony quickly decided to abandon a fledgling career as a gymnast to pursue circus arts, which she felt offered a less stressful environment.

"I was free to do something I loved instead of crying because I came in second," she says. "You can see the audience responding to you instead of thinking about how many points you've lost."

Dalhousie MLIS student Amanda Fullerton, who took classes at Atlantic Cirque from 2008 to 2010, echoes Anthony's sentiments. "It's non-competitive," she says. "It's really athletic and physical, but it's a supportive environment. Everybody's cheering you on."

In recent years, Guimond's business sense has earned her awards for entrepreneurship from the Canadian Youth Business Foundation and the Business Development Bank of Canada, not to mention the enduring respect of associates from across Canada.

Bona Duncan, a stage manager at Ontario's Stratford Festival, worked with Guimond on a 2004 production of A Midsummer Night's Dream and describes her former colleague as "spectacular. She turned a bunch of non-acrobats into trapeze stars in less than three months."

As for the next 10 years, Guimond says she'd like to expand Atlantic Cirque's artist agency, and to have the Moncton school be as successful as the Dartmouth one.

"I moved here not speaking English," she says, noting that her contemporaries in the business community deemed a circus school too crazy of an idea when it was originally proposed. "I'm glad I proved them wrong."