From Italy to the Hants County, Ciro Comencini leaves a lasting impression with his expertly made Roma Cheese. 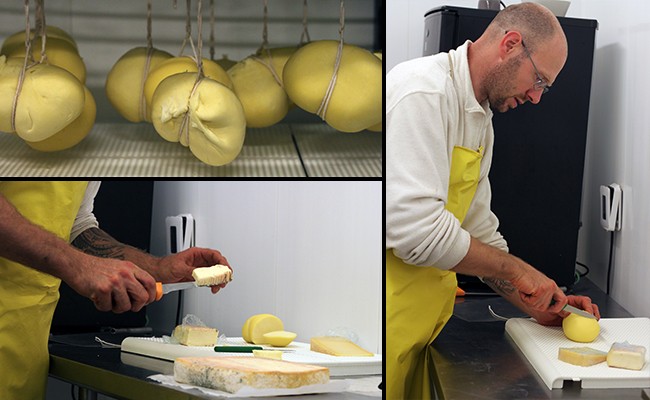 "I was just six years old when I started to go up into the mountain," says Ciro Comencini. "We were still making cheese with a copper pot and wood fire. You have to be very careful because a wood fire is not like propane that you can slow down or turn off, or like the a steam jacket you can adjust. With the fire you can't put a piece of hard wood, just like a wood cooking stove you use light stuff and you keep putting it in. And that was one of my first jobs, to keep the heat."

Comencini was born in 1981. Yes, 1981. He started working at the family's dairy in 1987. "And they were very rough in those days. They would kick you in the butt. If you were wrong, you could make a mess. And we didn't have a thermometer. There were already thermometers, of course, but my uncle never wanted to see one. He just used his hands to feel the temperature. So that's where I grew up. I grew up in the '80s but it was still like 100 years ago, because they were very stubborn and any change was like something wrong for them."

"I actually miss that," he says.

Comencini, now 36, moved to Hants County with his wife, Alessia Pulze, and their children four years ago. It was actually the second time they immigrated to Nova Scotia—they briefly lived in Kennetcook in 2010, but returned to Italy before moving back in the middle of 2013 and settling into farm life in Woodville.

It's a Saturday afternoon and Pulze has just returned from the Alderney farmers' market where their company, Roma Cheese, sells an assortment of cheeses: Mozzarella, burrata, stracchino, ricotta, asiago and taleggio. She wrangles their herd of children setting them to chores. Two of the youngest girls screech through the house, pink-cheeked tangles of brown curls, a couple of rangy kittens softly padding after them.

The porch is lined with mud-caked rubber boots, and the house crackles with a lived-in energy, a collection of well-worn furniture and the natural clutter that comes with six children. The walls are covered in images of Catholic saints, martyrs and angels. Statues of the Holy Mother share space with frames full of cheery family photos. Seated at the dining room table, Comencini is at once shyly unpretentious and a rapturous storyteller. He is bright and deeply knowledgeable when it comes to cheese, his stories deftly mixing rustic memories with scientific knowhow. He punctuates memories with an "oh boy," and a slap on the table.

Cheese makes for a humble living. Most of what the Comencini family eats they grow themselves in a garden that stretches out behind their house, tall stalks of corn shudder in light, hot breeze, tomato bushes starting to sprawl. They also have a few cows and pigs, though they are nowhere to be seen in the afternoon heat. A curved gravel driveway leads from their home and the slanted barn out back to his cheese workshop, essentially a large shed with a series of bright rooms gleaming with immaculate stainless steel, for the milk intake, the cheesemaking, cold storage and some office work.

Comencini grew up in Basson, a small Italian village not far from Verona. His father's farm, Malga Topei, is still there, with a dairy in the Veronese prealps on Monte Baldo, overlooking Lake Garda. There, among other things, they made Monte Veronese, a DOP cheese (Italian cheeses that have protected designation of origin), mozzarella, burrata, stracchino, ricotta and stracciatella. It was a very different life. There was no speckless stainless steel to be found.

"My father started with a pig farm," he says. "We used to feed the whey from the cheese to raise the pigs. And then he went ahead a little bit more on the side of salami and prosciutto and left the cheese to my uncle. So I learned cheese more from my uncle than my father, but it was all one family, right?"

In 1987, Comencini began working in the dairy, trekking up the mountain at the beginning of June, just before the school year ended. He would stay there, working with hired farmhands—often homeless men from the village—until September. His parents would stay down in the valley to run the farm.

"I was six years old when I started to do that life. We had two days to walk with the cows and sheep. The line was from this house close to the barn up there," he says, gesturing across the fields behind his house. "All the cows and all the sheep and then we had a little tractor will all the gear and everything. The milking machine was run by a small gas pump in those days. It was never working good. One time you would milk by hand, one time you would milk by the gas pump. Sometimes, oh boy, how many kicks I give to the pump."

There was no water or power at the dairy. "Nothing," says Comencini. "And it was the best life ever. It was very rough. Very tough." Work days were long and he slept on a burlap potato sack filled with leaves. "It was always full of fleas," he says, shaking his head. "Oh boy, they would bite you like crazy. I remember sometimes I would go outside and sleep in the grass because I couldn't stand it. And even that was no good!"

But then in the morning, like clockwork, he would get up and start the fire.

"It was a really rough life. I was crying because mama wasn't there, you know," Comencini says, nostalgia creeping in. "But it was good. I really miss it."

He goes on to reminisce about milking cows at night, the warm milk cooled by mountain winds that would blow through the open windows of the 18th century dairy, cream rising to the top—"the best cream," he says, pounding the table for emphasis, "because with the cream milk separator you take the different particles, even the smaller ones. But the best cream is the bigger particle: it's more smooth, more delicate, it has more flavours"—developing a natural culture that he could then churn into butter. His father would journey up to meet him on Saturdays, at first with an old donkey, then with a beat up military jeep—"a piece of junk," Comencini says—to get butter and ricotta to sell at market.

Comencini still makes cheese and it's still sold at market, but not much is the same as it was in sepia toned 1980s Italy. There is still a strict routine, though: On Mondays and Tuesdays he makes cheese—taleggio, asiago, ricotta—starting his chores around 4:30 in the morning, working around the milk deliveries from the nearby dairy farms he sources from. On Wednesday he does mozzarella and burrata. On Thursday he does deliveries. More fresh cheese is made on Friday for the Saturday markets. Other than the market, Saturday is a family day. Sunday more cheese is made, but the family also heads to church.

"I just try to make a living," Comencini says. "I miss the old days, though. Today so much is complicated. People want a website and lots of stuff like that." His exasperation is palpable. There will be no Roma Cheese website if Comencini has his way.

Thanks to friends like Claude Aucoin, he may not need one, though. Aucoin is a chef, sommelier and a faculty member at the NSCC. He met Comencini years ago through the Italian Wine Society's Amici del Vino wine dinners. Aucoin is a passionate supporter of Comencini, and has helped him make connections in the Halifax restaurant community and build up a list of wholesale clients.

They started selling to restaurants with small rotating menus where fresh cheeses and high quality local products are a natural fit: Field Guide, EDNA and Stillwell. He now also regularly sells to other restaurants of that ilk like Brooklyn Warehouse, The Canteen and Chives, and to retailers like Local Source. In total, Comencini processes about 500 litres of milk a week, more or less, depending on the orders Aucoin and his clients send to him on Tuesdays.

"Without Claude I couldn't go anywhere. I'm not a good talker and people see me and what do they see?" he asks. Comencini is nothing if not self-effacing. "You can't trust somebody like me, right? With my poor accent. And I understand I am pretty ugly," he says before stopping to briefly laugh with his audience. "If there is a restaurant and I go there to do something they are never going to call me back. If Claude goes there, everything goes fine."

Aucoin used to help him on his deliveries, too, since Comencini was not used to city driving. But now he's got the hang of it. Even better now that he knows a quicker route back out of the city. "Claude showed me the bridge route and tuk, tuk, tuk," he says waving his hand in a series of corner turns, "I used to go through Quinpool Road on the way home, ohh boy," he says with an eyeroll and another slap on the table. He doesn't miss those old days.