Occupier: "This takes away from Remembrance Day"

There is a driving rainstorm today, a forecast 100 millimeters of rain---a record even in soggy Halifax---with winds up to 90 kph. Many streets are flooded, and there are scattered power outages. To move or dismantle the encampment today is a hugely difficult enterprise.

I arrived at Victoria Park at about 1:30. There were two police vans on site, but no arrests were being made, yet. Demonstrators were gathered in a communal tent, discussing their options. Many were preparing to be arrested, and were discussing how to do so non-violently, and how support would be provided for the arrested.

I spoke with Occupier John Thibeault, who told me that he went down to Grand Parade for the Remembrance Day ceremony, and with the intent to lay a wreath at the cenotaph from the Occupy group. He says he was welcomed by the veterans, and an Afghani War vet asked if he could accompany Thibeault for the wreath laying; the two laid the wreath together.

Afterwards, says Thibeault, he spoke with mayor Peter Kelly. Thibeault says he expressed a desire to work out differences with the city in a diplomatic and positive manner, and Kelly smiled and shook his hand.

At that very moment the eviction notice was being served in Victoria Park.

[Audio takes a bit to upload on our website, but I'll post my interview with Thibeault here as soon as I can.]

Incidentally, Kelly has no power to evict anyone. The eviction notice was signed by "Acting CAO Mike Labrecque," the second in command at City Hall, behind Chief Administrative Officer Richard Butts. Butts is out of town---he maintains a house in Toronto, and flies there each weekend to be with family, I'm told. I have never reported this before, because I figured what he does with his own time is his business, but if he can't own something as substantial as an eviction of the Occupiers, maybe his every-weekend absences are a problem. Butts, after all, receives an annual salary of $285,000.

I also have no doubt that the irony of the eviction happening under the watchful eyes of Robbie Burns, whose statue graces Victoria Park, is completely lost on both Labrecque and Kelly, and the police officers enforcing it. 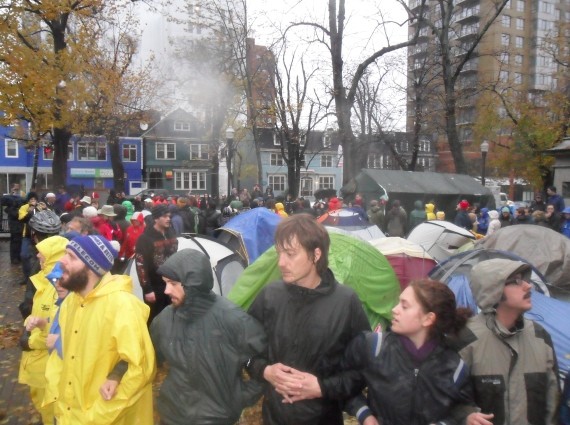 Update, 4:09pm
I just came back from the park. The police were taking down tents and throwing them in a police truck. A line of demonstrators faced off against a line of police, but neither side seemed inclined to break the line of the other, and a handful of officers were going about the business of removing tents unimpeded.

The demonstrators remained non-violent and calm, even in the very heated moment. They called a quick general assembly and decided to move what tents they could over to the square surrounding the statue of Robbie Burns, and have surrounded the tents, embraced arm in arm, the idea being that this would be their last stand. The group was singing and chanting when I left. I'd estimate that there are about 50 people in this last group.

Kyle Buote, one of the demonstrators, told me that nine people had been arrested, and that people had been "beaten and punched in the face" by police. Buote says that he has been involved in demonstrations in Nova Scotia for 20 years and "this is the most violence [from police] I've witnessed."

The group, which includes at least two ministers, intends to remain where they are at least until 10pm, which is when the park "officially" closes.

I'll head back to the park in a moment, and will likely have more updates.

Update II, 5:25pm
There were some tension moments at Victoria Park over the last hour, but the Occupiers appear to be leaving without risking arrest.

The group had several quick discussions about forming a resistance chain or staying in tents to force the police to arrest them, should the eviction continue. Only 12 people agreed to risk arrest; as it was explained to me, most of the group has jobs and careers to be mindful of, and didn't want to take that last step, while those who are unemployed, and the street kids, would.

After some back and forth, the folks who said they would risk arrest decided their numbers weren't large enough to effectively defend the encampment, so the group decided to take down what's left of their tents and other property, and to move it over to nearby St. Andrews church, which has offered them use of space to figure out where things are going. Evidently, the group will tonight discuss future plans at the church.