A report to the police commission reveals an otherwise behind-the-schenes battle between the city's legal department and night court adjudicators. 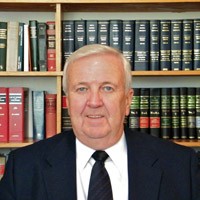 Night court adjudicator Gus McIntyre.
In a nearly fruitless effort to cut overtime pay to cops, the city’s legal department is fighting a mostly behind-the-scenes battle with the province’s judges, urging the courts to change the way hearings are scheduled.

At issue is the requirement that police officers be available to testify at court, as witnesses in cases involving people charged with crimes or violations. The arresting officer has to clear his or her schedule for the hearing date, and be available to testify, if necessary. For this, the officer receives a per diem overtime payment. These hearings are typically at night court.

The city wants to reduce these payments by consolidating the hearings. That is, if a cop is to testify in, say, five cases before the courts, the city wants all five of those hearings held on the same night, so that the cop only receives one per diem payment. The judges, however, object to that recommendation, and want the cop to testify on five different nights.

Night court adjudicator Gus McIntyre did not return a call or an email for comment, but deputy police chief Bill Moore tells The Coast that McIntyre’s concern is the perception of fairness. As Moore explains it, a defendant may be sitting in a courtroom, watching the same police officer testify three or four times in a row, with all guilty verdicts, and so the defendant thinks it’s useless to put up a defence.

Paperwork presented to the Board of Police Commissioners this week reveals a fascinating lobbying effort by city lawyers. “Pamela Williams has recently been appointed Chief Judge of the Provincial Court, “ writes city lawyer Josh Judah. “I am currently attempting to set up meeting with her. want to discuss Evidence Certificates, but also plan to take the opportunity to generally discuss court efficiency with her. I do not, however, want to specifically raise the issue of multiple trials with the same officer at this time.

“If I were to raise the issue,” continues Judah, “I think the first thing Judge Williams would do is communicate with her Adjudicators [i.e., the other judges]. When asked the question, even those who are not currently concerned about the practice will likely say they would prefer not to see the same officer too often. Others say they feel the process appears “tainted” and the scheduling should be altered. My guess is that once the issue is formally raised, the Adjudicators get on the same page and Judge

Williams may direct Court Administration to stop scheduling Officers for multiple trials on the same evening. We would then be position to lobby for change, but would be at their mercy.”

In short, Judah appears to say that the judges so distrust the city’s lawyers that if the lawyers ask for a change, the judges will do the exact opposite. This, needless to say, is a remarkable statement to put in a public document.