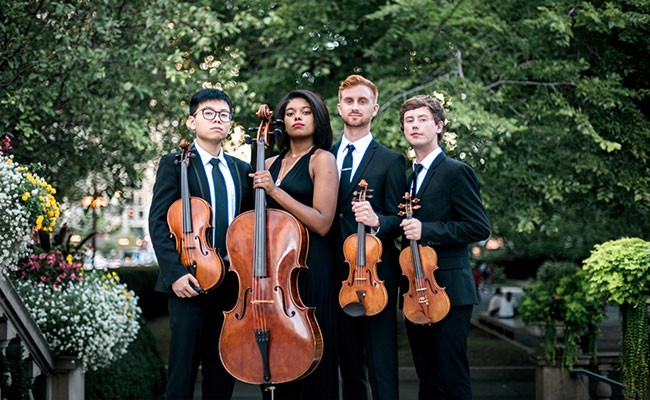 For Chicago’s Yas Quartet, inclusion is everything.

Yas Quartet has been making waves. The international string group is fresh off a third-place win at the 2016 Schoenfeld International String Competition in Harbin, China.

Made up of violinists John Heffernan and Artem Kolesov, cellist Titilayo Ayangade (who has appeared on Empire!) and violist Yufan Zhang, this fab four juggles its concerts with being students at the Chicago College of Performing Arts. But it's not all lilting melodies and all-black dress clothes.

After a morning of rehearsing, Kolesov received news that the visa application of Zhang, who is originally from Qingdao, China, was rejected, leading to a scramble for a replacement, ultimately in the form of musician Robert Switala. Of the four frantic musicians, Kolesov spoke with The Coast about his experiences with the group through a phone interview.

For Kolesov, this Cecilia Concerts presentation isn't any ordinary show. Born and raised in St. Petersburg, Russia, Kolesov came to Halifax to study violin at Dalhousie University with Philippe Djokic. He graduated in 2015 and moved to Chicago, where Yas Quartet was formed.

"It's like coming home," he says of his upcoming three-day visit. "I'm super excited because I have so many friends that I have to see and unfortunately not enough time, but I'm excited to be going back to where it feels like my home, you know?"

For Kolesov, music and his career in it has been therapeutic. "I had a lot of depression when I was younger—and even now—one of my ways to express myself was through music," he says. "It was a way to escape what was going on at the moment."

"We are not reaching out, we're including them in the music," Kolesov says of the sick children and young offenders whose lives Yas Quartet has aimed to enrich. Appropriately for a group of diverse individuals, inclusion is everything.

"If you're going to a certain community you want to have someone who can represent that community or relate to that community somehow," he says of the international group. "We have a Chinese person, a Russian person, a white American, an African-American person, we have LGBT people—all sorts of people."

If that's the case, it seems to be working. Since its inception, Yas Quartet has travelled around the world, aiming to make classical music more accessible and inclusive.

Following its March 26 performance, Yas Quartet will add to its resume of inclusion and engagement, hosting a masterclass at Dalhousie on Monday, March 27. (Kolesov mentions, with a sheepish chuckle, that date is also his birthday.)

Celebrations aside, one question remains: What is the meaning of its odd name?

"It's exactly what you think it is," Kolesov says, referring to Johnny Versayce's 2013 viral video featuring Lady Gaga. What started as a joke began to feel like the perfect moniker. "It's a very positive thing," Kolesov continues, "one of our hopes for the future is that wherever we perform our fans or our listeners will go 'Yassss.'"