Jon Blanchard’s Halifax Footlongs is back for another summer of serving up some of the Seaport Farmers’ Market’s best in a bun. 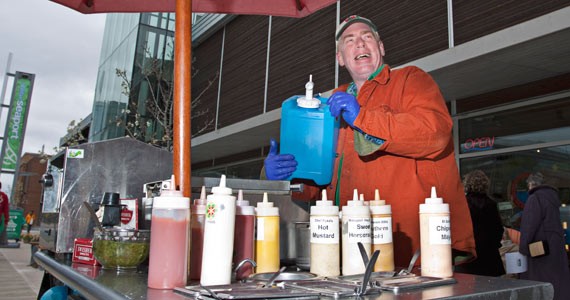 "That lady right there is responsible for the store that provides me with the bacon. And she can introduce me to the man that made the bacon and, if I want to, I can go visit the pig," says Jon Blanchard, pointing out Getaway Farms Butcher Shop's Cynthia Kennedy as she stops by his hot dog cart in front of the Seaport Farmers' Market. "Why would people not serve food that way always?"

Don't mistake his enthusiasm for an over-the-top sales pitch—Blanchard is just plain proud to showcase the toppings and meats that fill out the menu at Halifax Footlongs. And he's pretty tickled to be back on the pier for a third season at the market. "People don't know you can grow horseradish in Nova Scotia, or that I get the best peppers for our hot sauce from seedlings here," he says. "It's exciting to be able to tell people where it came from."

With some old recipes in hand—like one for a deadly Montreal Pool Room coleslaw—and quality market-fresh veggies and meat at the tips of his fingers he debuted his cart back in 2012. Blanchard has a small farm of his own in Malagash, where he grows horseradish and is working on organic hops, but Footlongs was still a bit of a departure from his last couple of decades.

"I'd spent a whole career doing computer work and writing, and not dealing with a lot of human beings. And one of the great things about the cart is that you're really working with people," he says. "You're standing around a little steamy campfire and you chat and it's personal."

Blanchard hasn't completely stepped away from the screen—he still offers his web expertise and tech assistance as a Telecomix activist—but he says Halifax Footlongs, while completely separate from his tech work, is a good way to unwind. "The cart provides a nice balance because some of that work is really grim," he says. "I really needed a place where people were happy. You know, nobody's ever unhappy at a hot dog cart."

If for some reason he can't get what he needs to make the perfect dog from the Seaport Farmers' Market—say there's no cabbage for his slaw—he'll look to Halifax, then Nova Scotia. But order a dog from Blanchard—whether it's a straight-up smokie, a footlong, veggie dog, turkey club or Hawaiian—and chances are you'll get a taste of Getaway Farms, Sweet William's Country Sausage, Roselane Farm, Fox Hill cheese, Moon Fire Farms, El Gallo Mexican Cuisine or Fruition Raw Foods, to name just a few of his crew. And that's not to mention his own pickles, chows and sauces.

"The reason my cart is what it is is solely the result of the people supplying it," he says. Recently, he even cleared out his water and soft drinks selection to make room for Suprima cider, and only Suprima cider. Because, why carry anything else?

"I had an opportunity to really kind of present the food that's in the market in an inexpensive and fun way. For five bucks you should be able to eat well," says Blanchard. "That's why I do what I do, it's good food. How could you not want to do really good food if you had a chance?"