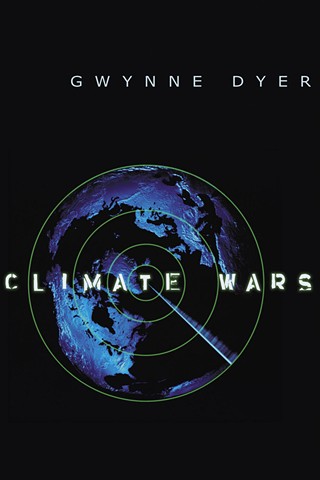 Thanks to scientific advances, we can predict certain phenomena: lunar eclipses, the orbital periods of comets, the weather in 40 years (to an extent). Predicting politics is a crap-shoot. That's what makes Gwynne Dyer's recent book, Climate Wars, so amusing and frustrating.

In an attempt to take a crack at the "political and strategic consequences of climate change," he states in one of his scenarios, "The Year 2045," that, amongst other things, Padania (a nation-state in northern Italy) is threatening the Northern Union (the EU kicked out the failed states of the Mediterranean) with a nuclear arsenal in a demand for food.

Dyer does proceed from each scenario with a chapter that attempts to anchor his thoughts with some quotations; however, all he can draw upon---besides scientific models for climate change, which give no indication as to how human affairs will unfold ---are reports by American and British government security agencies, whose research methods are never mentioned, and who Dyer admits could be biased so as to justify their budgets.

Whatever the political consequences of climate change will be, this book does nothing but suggest Dyer's poorly thought-out suspicion.