Climb aboard the Stage Mother ship 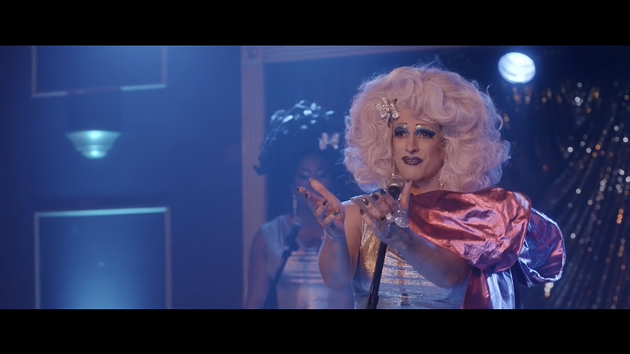 Big hair, big makeup, big attitudes: It became clear to screenwriter Brad Hennig one day, while perusing his social media, that the drag queens and church ladies on his friends list weren’t so different after all.

That seed of mid-scroll discovery would sprout into Stage Mother, the new movie that is, as director Thom Fitzgerald puts it, “absolutely a fish out of water tale”—a musical dramedy with heart that feels like a successor to Kinky Boots’ campy, glittery throne.

It’s what Fitzgerald, speaking via Zoom, calls “a classic backstage musical”; “a classic women’s picture, mid-20th century style: Something Joan Crawford might have played in the early ‘50s.”

Instead, the flick—set in San Francisco but shot in Halifax in 2018—follows Jacki Weaver (as good a stand-in for Joan Crawford as one could pray for) as a Baptist church choir director who inherits her late, estranged son’s failing drag bar.

“It’s really about a mother learning to better love her son,” Fitzgerald says.

Additional star power courtesy of Lucy Liu and Adrian Grenier doubtlessly helped the film gain buzz, but it’s the amount of diverse casting in all roles that helps Stage Mother hold its own: In an era where queer stories are still too often told by straight actors, Fitzgerald’s cast is an accidental case study in the good that comes from real representation.

Says relative newcomer Allister MacDonald, who plays a drag queen named Joan in the movie, on that same Zoom call: “I feel like the casting of myself and Oscar Moreno and Mya Taylor (who’s well-known from Tangerine), I think what it provides the film is a familial understanding and chemistry onscreen in a very specific way that I don’t know that I’ve seen before.” Fitzgerald’s gaze is fixed on MacDonald as the actor continues: “We just clicked onset in a way only queer people could—and I think that translates to the screen and brings an effortless nuance without hitting it on the head. It was really special to be a part of and really special to watch.”

“We are of different generations and I don’t know who’s gay or straight when I cast them, and I don’t think I should, and I don’t ask and I don’t think it would be right to ask,” adds Fitzgerald of the film’s roster. “Mya and Oscar and Allie were cast because they were awesome. Not for any other reason. It’s the same with all the diversity in Stage Mother: It’s more by meritocracy than by any design. Lucy Liu made a fantastic ditzy blonde. It’s just because she was so talented. That was the approach I took to casting.”

And while Liu’s sharp side-eye and MacDonald’s divine stage presence will hook you, the best character might just be a silent one: “A big character in the film for me is the queer space, is the drag bar. We have nights in the film where there are two people and nights where there is a packed house," MacDonald— who split his time between the set of Stage Mother and performing in the titular role of Neptune’s 2018 season opener, Shakespeare in Love—says. "The film harkens back to the pure underbelly of what it’s like to see a queen take the opportunity to express this persona she’s conceived, no matter how many people are there.”

MacDonald adds: “For me as a queer person, queer spaces—night, day, morning—they’re so important and I’m drawn to them: They’re a magnet and I’m a piece of metal. I’m there almost too much. And I’ve watched the film a lot and when these characters have ideas, where there’s sparks in them, where they’re exposing their truest selves, a lot of them, the first time, it’s in Pandora’s Box, the bar in the movie. And I don’t think that is unintentional. Queer spaces are places you go to find parts of yourself you might not have known were there."