It’s not just about cramming into a tiny car (although sometimes it is–the physical theatre of clowning bonds people together and has the power to heal. 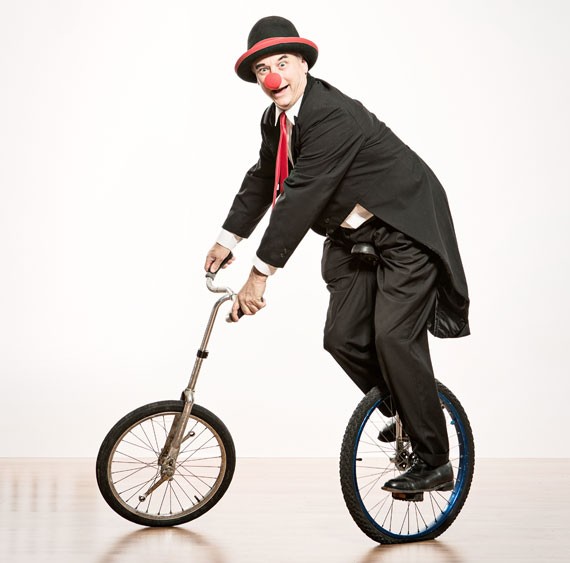 Most people wear masks but not every veneer is for hiding behind. Fair of and red of nose, a clown's disguise is not to conceal emotion, but to uncover it–disarming our everyday masks.

Clowns are surrounded by a stigma of fear and uneasiness. It only takes one unprofessional Santa Claus to a deep prejudice against disguised strangers entering your personal space. A penchant for Hollywood horror films wouldn't help either. Stephen King's 1990 film, It, is a classic cinematic clown crusher. The antagonist, Pennywise, a child-murdering clown turned alien spider, is not exactly a flattering poster boy.

Mike Hirschbach, director of the Halifax Circus School, says fear of clowns is only a cultural meme. In 40 years as a professional clown, he has met only one person with a legitimate phobia. "There are far more people that are afraid of flying," says Hirschbach. He says there's a difference between not liking clowns and being afraid of them, the same as there's a difference between not liking spiders and having arachnophobia.

Despite this ill-founded popular stigma, Hirschbach has made clowning–or physical theatre–his life's work. He teaches circus arts full-time at both a recreational and professional level.

Physical theatre is based on human contact–"on vulnerability," says Hirschbach. Vulnerability scares people while also revealing a human need to be comforted.

Hirschbach was performing in physical theatrics with Cirque de Soleil's Dralion in 2001. On September 11 they performed for the people of Boston, from where the planes that flew into the World Trade Center flew out. They knew there would be people at that evening's show who were immediately affected by the attack. They decided not to cancel–this was their job. "You don't put on a show just when the circumstances are ideal, you put on the show when people need it most," says Hirschbach. "It was the best medicine for our audience, who really came just so that for a period of two hours, something would take them out of their thoughts."

Hirschbach's work with the Halifax Circus School helps people work through difficulties too. Besides regular classes in performance, juggling and circus, acrobatics and aerials, the school a youth outreach program called Circus Circle. It's in its ninth year running and it's free.

The circus school is in the gym of St. Matthews United Church on Barrington Street. There are about 55 youths in the outreach program coming from all backgrounds; addiction, drugs, broken families.

Circus Circle allows the youth to create a new and offers the communal admiration they lack. "Here they can be known as that kid who is incredible on the unicycle, that kid who can juggle four or five balls, that kid who always helps out or who can be relied on to show up on time," says Hirschbach. "As their circus skills improve their social skills improve as well."

Tonight the students have a diablo workshop. It looks like juggling an hourglass (or three) on a skipping rope. One student balances on a tight rope suspended three feet off the ground. Another hangs from an aerial hoop by his ankles. A juggler makes two new kids laugh by bashfully juggling seven balls behind a divider. They rise and fall consistently above the top of the wall.

Hirschbach's main fields are juggling, unicycling, and performance development. "Circus performers tend to have about three strong skills and another six in their back pocket," he says. Hirschbach has performed spectacle shows for tens of thousands all over the world. The Halifax Circus has its own professional performing troupe as well.

But if you're looking for a party or parade performer, you want Milo T. Clown. (The T stands for The.) Miles Leahy, or Milo, has been clowning around for 25 years.

Leahy's clowning is a side job, and it keeps him busy. He does birthday parties, holiday events and even store openings. Holidays and summer are busiest. In he rides his 1953 adult-sized tricycle, the Milocycle. It's red, green and yellow and outfitted with a colourful beach umbrella and a trailer of balloons, waiting to be shaped into animals, aliens and crowns. He has crafted the Genie from Aladdin and the Starship Enterprise. "I like to refer to myself as a ," Leahy says.

"Milo is just Miles with the volume cranked way up," says Leahy. But "when the nose goes on, that's when the character really comes out."

Leahy attends national and international clown training conventions and is the east coast ambassador and second vice president of Clowns Canada. His name is on a trophy for best slapstick at the Clowns International Museum in England.

For younger children's parties, he comes as Milo Lite. This means less makeup, more like the clowns on The Big Comfy Couch.

Leahy makes a point of talking to each child at all his parties. "Every child wants to know you see them," he says. He uses his clowning to comfort children at the IWK, saying that visiting them is a privilege. During his they can forget about their illness. "For that moment in time, they're not a sick child, they're just a child," he says. "That's a gift to me."

When the Kosovo refugees were in Halifax in 1999, Milo was there too. "The language barrier wasn't a problem," he says. "Because funny is funny in any language."

He put on five shows for the refugees. "They had come from some horrific things in their home. They had seen people slaughtered, they had their homes burned. But for the time I was there the children were just children having a great laugh, the parents were all smiling. They were just a family enjoying a show," Leahy says.

This ability to inspire wonder–to lighten hearts and bring joy–connects both Leahy and Hirschbach's work. When he's not clowning, Leahy works for DND as a defensive driving instructor–"I warn everyone else about the other clowns on the highway." He also does community theatre.

Hirschbach says that theatrical training is key to being a good clown, in fields like tragedy, melodrama and mask. It helps make their skills and training look effortless. Fluidity is important because training is only the vehicle of clown work. It's not . The magic is the human connection.

"This is the essence of clown work," says Hirshbach. "You can't just go on stage and have memorized a script. You can't just have a bag of tricks. Clowning is not about tricks. Clowning is not about makeup, it's not about . It's about reminding people of where they come from. Where we come from, where we all come from, is a state of intense curiosity, openness to the world, a sense of wonder and a sense of deep empathy or connection with other people.

"This is the stuff that gets worked away by our everyday lives. A really good clown will open a door that allows the audience to walk through into that place again."


“Growing older is mandatory, growing up is optional.”


“Clowns are highly innocuous, entertaining people who embody a kind of wise foolishness.”