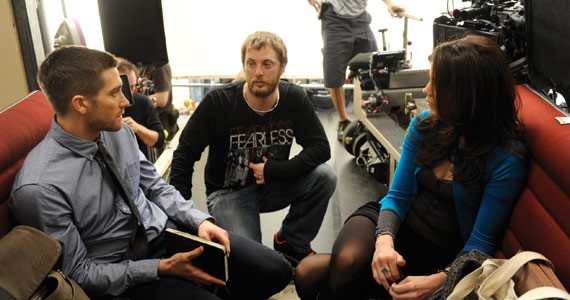 Sci-fi helmer Duncan Jones confirms his status as a fantasy auteur with his time-twisting feature Source Code. Matt Semansky spends a little more than eight minutes with the director.

"My dad used to insist that I spend an hour or two a night reading," recalls Duncan Jones. "Sci-fi was kind of my candy, my go-to whenever I wasn't in the mood."

Jones' dad is a guy who---though he's famously claimed to have trouble remembering the '70s---obviously managed to keep at least a few of his parental priorities straight. Through a decade of hazy indulgence, David Bowie made sure his young son got an education.

Now 40 and decades removed from his first close encounters with writers such as George Orwell, J.G. Ballard and William Gibson, Jones is carving out his own impressive niche in the science fiction genre. The director's first feature, Moon, landed in 2009 with an eerie atmosphere reminiscent of 2001: A Space Odyssey encircling an intense performance by Sam Rockwell as a lonely astronaut. His follow-up film Source Code, which opened last weekend, finds Jake Gyllenhaal bending time to determine the identity of a train bomber.

Much like Rockwell's character couldn't make sense of the mysterious doppelganger that turns up partway through Moon, Gyllenhaal's Colter Stevens can't understand why he keeps reliving the eight minutes before the bombing. Jones concedes that the two films share similar themes.

"I think when I was looking at the script and choosing it, the thing that was appealing to me was all the differences. But on a subconscious level I must have been affected by some of the similarities," he says. "The whole question of identity and the idea of institutions taking advantage of individuals run through both films."

Also running through Source Code is a particular scene in which Stevens wakes up on a train across from Michelle Monaghan, confused about how he got on board and why he sees another man when he looks in the mirror. The scene invariably concludes with an explosion. As Stevens comes to understand his situation, however, the intervening minutes between his awakening and the big bang change with each repetition.

Asking the audience to watch the same sequence over and over again is a tough proposition---one that Jones says was one of the most appealing aspects of the script. "I like solving puzzles---that's kind of my kick in filmmaking---and there was the opportunity here to really do some interesting things," he says. "There was something really interesting about, 'How am I going to deal with this in such a way that the audience doesn't feel like they've had to see the same thing more than once?'

"There was an opportunity to come up with a real novel solution to that, and that was part of the fun for me."

The result is a scene that grows familiar but not dull, one that serves as a constant reference point for the audience.

Jones uses the time spent away from the ill-fated train to give the audiences glimpses of the military machinery--- personified by Vera Farmiga and Jeffrey Wright---that is manipulating Gyllenhaal's character. Though Source Code puts advanced technology in the hands of some morally dubious folks, Jones is no Luddite.

"I'm certainly someone who believes that technology, in the long term, will benefit the world we live in," says Jones. "I'm actually a glass-half-full kind of guy. I'm very optimistic about our future, even in the troubled times we're in right now.

"I really do believe the best in human nature will come to the fore."

Source Code is not showing in any theaters in the area.