Planning author says the Interchange redevelopment is the next step in Halifax’s historical slum removal strategy. 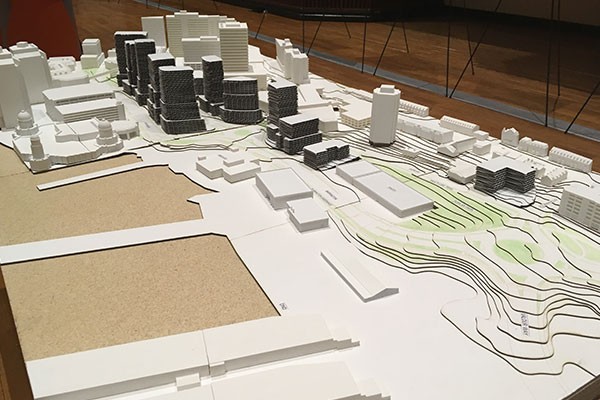 The new neighbourhood set to replace the Cogswell Interchange is the conclusion of a slum removal strategy that started in the early 1900s, says a Concordia University planning professor, and now threatens affordable housing in the surrounding area.

Ted Rutland, the author of Displacing Blackness: Planning, Power and Race in 20th Century Halifax, says every Black community in HRM has seen some form of displacement—from Beechville to the Prestons, the north end and, of course, Africville.

The anti-Black history of planning is demonstrated by the treatment of African Nova Scotians who were first excluded from the city’s services, then moved for city expansion. It was also demonstrated by the displacement of thousands of people between 1958 and 1961—mostly working class—who lived in the Cogswell area before the interchange was built. Community members, leaders and business owners who protested were largely ignored, bought off or evicted.

Today, the interchange is described as ugly and not useful. “That’s already a problem,” says Rutland, “because you’re not recognizing the displacement and violence that brought that interchange into being.” Ugly and useless, sure but also “a violent and unjust project.”

That’s not what’s being seen with the Cogswell redevelopment’s public consultations. Councillor Waye Mason confirms it’s not expected local residents bordering the new district will be able to afford to live in the high-priced new neighbourhood, though HRM has hopes at least one building will include affordable housing.

City hall says more affordable housing isn’t off the table, though Rutland points out “that couldn’t be further from a commitment.”

Since at least the 1800s, planning in HRM has taken shape by “putting Blackness out of view,” says Rutland, “and trying to make life better for what remains—usually white life.”

The construction of the interchange was just one phase of a nation-wide era of “slum clearance” that lasted from the early 1940s to the late ’60s. At one point, Halifax city hall proudly called it “blight removal.”

Now uniformly recognized as a massive planning blunder, the redevelopment of the interchange aims to achieve the city’s newest planning goals, as defined in HRM By Design and the Regional Plan.

Rutland wrote about those plans in his book, and has called the Regional Plan “totally illegitimate.” Local Black communities contributed their input to the plan through similar public consultations like those ongoing for the Cogswell district, but “all of the things they demanded were ignored,” says Rutland.

Adding insult to injury, the process resulted in new money for like water mains, transportation and public amenities, but most of that money was channelled outside Black communities. As well, new restrictions were imposed on the use of land, which applied in certain parts of HRM and not others.

“It just so happens that those restrictions were put in place in all the surrounding Black communities,” he says, “and the planners defied their own policy—which says we need to prioritize Black self-determination in communities like East and North Preston—by changing local area plans for those areas against the wishes of those communities without their consultation.”

Rutland says his writing is primarily directed towards Halifax’s white settler community to get them thinking deeply about this planning history and help figure out a way to support the struggles of Black communities against discriminatory planning processes.

A reckoning with the history of anti-Black urban planning in Halifax must be meaningful and productive before a large-scale development of condos and high-priced apartments can be considered anything but a threat to the historical residents of the north end, he says, including descendants of Africville, who already endured displacement for the sake of a thinly veiled, Eurocentric vision of modern human life.