What it’s going to take for a woman to stop getting used by the men she sleeps with, and start getting off.

QI’m a straight woman and have been sexually active for about six years. I’m in my mid-20s now and about ready to become a “man-hating feminist.” I feel like I can figure out what a guy wants in bed pretty easily. I cannot remember a single time when I’ve had sex with a guy that he has not had an orgasm.

I, on the other hand, have never had an orgasm. Quite the opposite! I’ve barely even been aroused lately when I am having sex, because it’s easy to tell when the guy I’m with just wants to come and that is the only thing on his mind. This makes me want to just get it over with. I’ve become really angry with the male population and their lack of care for pleasing a woman. 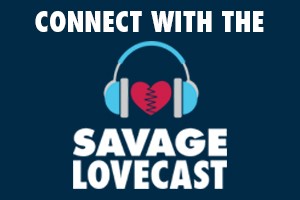 Will it take a Women’s Pleasure Revolution for men to realize that their female counterparts have needs, too? Granted, I’ve had sex with only five guys—but in my mind, Dan, that’s five too many. I also have girlfriends in the same boat. Men skip foreplay, they don’t return the favour when it comes to oral, and they’re so eager to get their penises in my vagina, they barely touch me before doing so! THIS MAKES ME FEEL USED. I’m a giving woman by nature, but I feel like men just take. I don’t hate men. I actually really like men. In fact, I was madly in love with one of the five.
—Really Enraged/Vexed Over Lazy Turds

A“Lots of foreplay, mutual oral, enough touch to get me going or, better yet, get me off at least once—all of these things have to happen before we fuck.” Practice saying that in a mirror, REVOLT, and then say it out loud to the next guy you sleep with. Say it and mean it. And if those things don’t happen—if he skips the foreplay or won’t go down on you or refuses to touch you with anything other than his dick—then he doesn’t get to fuck you. Get up, get dressed and go. The sooner you walk out on guys who don’t want to do those things, the sooner you’ll find yourself in bed with guys who do. So no more having sex to “get it over with,” no more sticking around for shitty GIOW sex that leaves you feeling used.

Some guys will be happy to see you go. Given a choice between a woman they can’t treat like a crusty tube sock and an actual crusty tube sock, a statistically significant percentage of straight guys will choose the crusty tube sock. Don’t waste your precious time or pussy on guys like that. And don’t waste a moment of your time or any of your pussy on guys who will engage in a little half-assed foreplay or go down on you for 30 seconds before they try to stick their dicks in you. Only fuck the guys who enjoy foreplay and are excited to eat your pussy before fucking you—or instead of fucking you.

The revolution you want isn’t going to come because some homo ordered straight boys everywhere to start engaging in foreplay and eating pussy. The revolution is only going to come—you’re only going to come—if you and your friends and all women everywhere stop settling for GIOW sex. Now, some women have GIOW sex because they’re afraid a guy might react violently if they withdraw consent. They fear male violence, and that’s a sadly reasonable fear. But too many women have GIOW sex to avoid disappointing male partners who have already disappointed them; too many women slap on a smile and fake an orgasm to spare the feelings of dudes who don’t give a shit about their feelings or their pleasure.

You say you were in love with one of the five guys you had sex with, REVOLT, which I hope means you didn’t fear him and could talk to him. Yet every single time you had sex, you allowed this guy to essentially masturbate inside you. You didn’t stick up for yourself, you didn’t advocate for your own pleasure, you didn’t say, “Here’s what you need to do to please me.” Take a little personal responsibility here: You let Mr. One-In-Five get away with it. He let you down—he should have been more proactive about pleasing you—but you also let yourself down. No more. Insist on more and better from here on out, REVOLT, and you will get more and better.

Q I’m a straight woman in my mid-30s. For most of my adult life, I’ve gotten off on fantasizing about my boyfriends fucking other women. So far it’s been fantasy-only, but I’m intrigued by the prospect of a real cuckquean scenario. However, I’ve always been reluctant to share my kink. It’s not that I fear rejection or judgment. I think most guys would be into it, including the lovely man I’m currently in a committed relationship with. Rather, it’s my own discomfort with a kink that I fear stems from an unhealthy emotional place. Insecurity, avoiding intimacy and difficulty trusting men are all issues I’ve struggled with, and the cuckquean kink plays right into all of that. I’ve worked with therapists over the years and gotten into a somewhat solid place emotionally. Alas, my kink remains, and has gotten stronger to the point where I’m imagining my guy fucking someone else about 99 percent of the time in order to come. I wish I could get more enjoyment from “normal” sex. I’ve read your column long enough to know that I should probably just embrace my kink and enjoy it. But while I’m trying my damnedest to be sex-positive, I can’t get around the nagging feeling that there’s something “unhealthy” about this fantasy. If my kink is based on specific insecurities/fears, do they get even more hardwired into my brain with every orgasm?
—This Reluctant Cuckquean

Two quick questions: 1. How much more hardwired could something possibly become if you already have to think about it 99 percent of the time in order to climax? 2. What if imagining your guy fucking other women is “normal” sex for you?

A lot of people’s kinks are essentially eroticized fears: the fear of being humiliated, the fear of being exposed, the fear of being cheated on, etc. Not everyone eroticizes these fears, of course, but so many of us do that it really should be covered in sex-ed courses. In your case, TRC, your erotic imagination took something that scares you—being cheated on—and turned it into something that arouses you. The difference between your worst fear and your ultimate turn-on is control. If your man fucks another woman, it will happen because you wanted it to (you gave him permission) and there will be something in it for you (it will get you off). Which is not to say you ever have to act on this. You don’t. Plenty of straight men are turned on by the fantasy of their wives being with other men but know they couldn’t handle the reality of it, so they enjoy it as a fantasy only. But they don’t—or the healthy ones don’t—deny themselves the fantasy, whether it’s just playing it out in their heads or their monogamous partners indulging them with a little cheating-centred dirty talk during sex.

We can’t will kinks away, TRC, we can only embrace and accept them. Again, that doesn’t mean we have to act on them—some fantasies can never be realized for moral reasons—but to beat ourselves up about our kinks is a waste of time.