Comfort, safety and the politics of sexualized violence

The colonial history beyond Dalhousie's misogyny.

By Rachelle McKay and Darryl Leroux 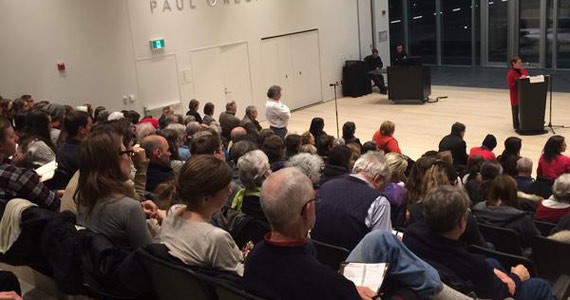 Darryl Leroux
A sea of faces attend the How We Live Matters panel at the Central Library on January 8.

After weeks of protest and public debate about gender-based violence, a high-profile public event took place at the Halifax Central Library last Thursday. Hosted by the Canadian Centre for Ethics in Public Affairs, it attracted hundreds of Haligonians concerned with the apparent increase in public displays of sexualized violence on HRM campuses. It was an auspicious occasion due to the remarkable number of people flooding into the new library and compounding the new space’s electric ambiance.

While waiting in line, we were struck—though, not completely surprised—by the overwhelming whiteness of the crowd. Since the Dalhousie Dentistry Facebook posts became public, debate has relied on a narrow understanding of gender-based violence that constructs the experiences of women within male-dominated university spaces as a primary and, at times, universal experience.

The event focused mainly on Internet pornography and social media as responsible for moral decay among today’s youth. Yet, indigenous women and girls have faced centuries of misogyny and gender-based violence that are rooted in colonialism. In fact, Andrea Smith has demonstrated how sexualized violence was at the centre of the European settler colonial project, and as many indigenous thinkers are demonstrating today, continues to be a primary means through which our society operates. We may imagine an innocent past where our boys and men didn’t openly celebrate sexualized violence, but that past has never existed; indigenous women and girls, who have borne the brunt of European “civilization,” have always been exposed to very public forms of violence and degradation.

Another clear focus of recent concerns has been the need to foster safety and respect within public debate. While it may seem quaint and harmless—in keeping with Canadian values of social order and propriety—the reality is that indigenous women and girls still aren’t safe in many of the same institutional spaces that we claim are respectful. Often, “safety” and “respect” are used to avoid discussing how racism and colonialism continue to influence gender-based violence.

While this may maintain some forms of comfort, it certainly does not increase indigenous women’s safety.

Don’t get us wrong, public condemnation of sexualized violence is necessary. Between us, we have organized several community and university-based events over the course of the past year, all related to colonial and gendered violence against indigenous youth and women. In a city rocked by the murder of a young, indigenous woman student in the past year, no academic centre, faculty group, feminist organization or student association has held a discussion about the specific and widespread forms of sexualized violence indigenous girls and women face.

How do we, as white settlers, become complicit in gender-based colonial violence in the lives of indigenous women and girls, even as we condemn sexualized violence? For those of us concerned about recent events at Dalhousie, Saint Mary’s and Mount Saint Vincent, it will require finding a way out of the same comfort zone that allows us to recreate colonial violence daily. It means listening to and learning from indigenous peoples with humility and without judgment, especially when we feel uncomfortable, in order to value the voices, the experiences—the lives—of indigenous women as if they were all Dalhousie students. a