The Carrot and Knife for Hire’s Paul Routhier bring the community together to promote cooking at home. 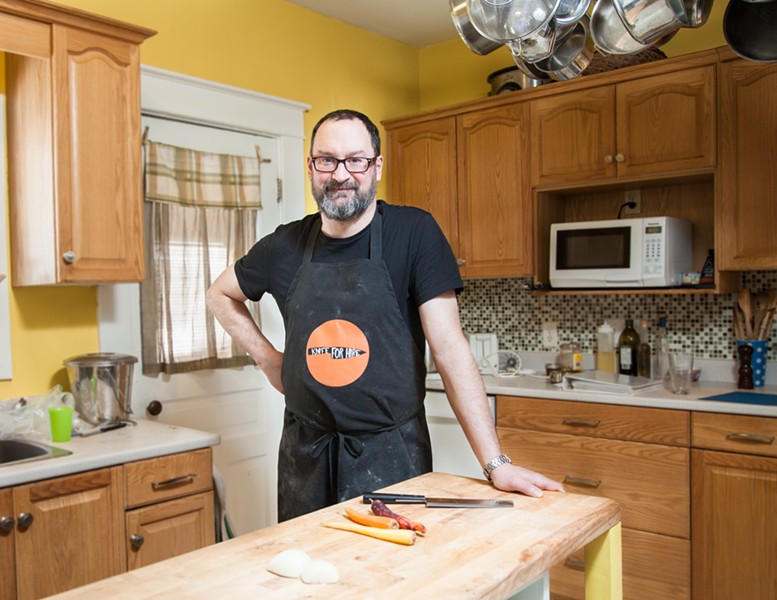 “It’s a local grocery store that’s trying to change the philosophy of what you think of as a grocery store,” says chef Paul Routhier of Gottingen Street’s The Carrot. “It’s the type of place you pop in every two or three days and buy what’s fresh.” But beyond that, the co-op grocery store is focused on getting its community cooking at home, and Routhier is the man for the job. A longtime fixture in fine dining—you’d know him from Maple, The Five Fishermen and Fid—he’s transitioned into meal-planning, recipe-writing, catering and cooking classes as Knife for Hire.

“Food security has always been an important issue to me, and getting people to eat healthily is vitally important,” says the 20-year kitchen veteran and member of The Carrot’s Maritime Harvest committee, which promotes healthy eating locally. “Unfortunately it’s more affordable to buy fast food, or convenience food, than to cook at home. It can be viewed as a chore, like putting out the garbage. But what could be more important than worrying about what you’re putting in your body?”

This month kicked off Routhier’s in-store cooking demos, Sunday being the final one in March. Attend the two-hour event and you’ll get a front-row view of the meal from start to finish, with plenty of tasting opportunities. “I’m doing things that are ready in less than half an hour,” he says. “People can ask questions and we’ll talk it through together. We’re taking the intimidating factor out.” Each of the demos include 10 or fewer ingredients, most of which can be purchased at The Carrot, and you’ll leave with the full recipe in hand. After winter, the Maritime Harvest committee aims to run an outdoor weekend market behind the store, featuring work from local artisans, that’ll coincide with the demos. But until then, you can feast on Routhier’s in-store cooking tips, and creations, twice a month.

“It doesn’t have to be a chore,” he says. “It’s not rocket science, it’s just cooking.”