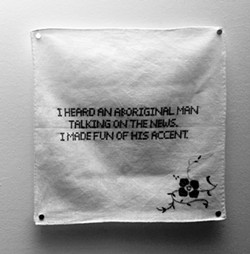 Anybody who visits Halifax MP Megan Leslie’s office from now until April will encounter the work of textile artist Tamara Huxtable. Much of Huxtable’s art is text-based, with words and phrases embroidered onto unframed pieces of fabric. “This medium just happened to align harmoniously with the ideas about identity and eventually race politics that I was, and am, still exploring,” says Huxtable.

The works are on display throughout the Gottingen Street office, boldly calling attention to issues of latent racism that often goes unnoticed. Come Clean, one of the series in the exhibit, consists of confessions stitched onto vintage hankies. “I used to dress up as an ‘Indian Princess’ but I was a little white privileged girl,” is one example. “The Come Clean series began with my own politicization,” Huxtable says. “As I started to adopt anti-oppressive politics, I inevitably had to come to terms with my own oppressive behaviour. I feel like, in terms of race politics, it's integral to recognize the run-of-the-mill, sort of accepted ways in which we all play a part in the marginalization of others. So I started stitching a few hankies with my own admissions.”

After putting these to needle and thread, Huxtable began asking her friends to submit confessions of their own. “It was more difficult than I thought it would be to get these statements. Partly because a lot of people think that if they are good people, they don't ever do or say anything that is racist, and partly because some of the more subtle behaviours are more difficult to recognize as racist.”

Harleen Randhawa
"A lot of people think that if they are good people, they don't ever do or say anything that is racist," says Tamara Huxtable.

Another important part of the show is about reaching out to a local black audience. “I do live in the neighbourhood and was eager to show in a non-traditional space that would be accessible to that community. It's a predominantly black neighbourhood, and as a black artist making work relating to my own experiences, it's important for me to reach black audiences.”

Huxtable also hopes that having her work displayed in an unconventional space will result in more productive conversations about our unchecked behaviour surrounding issues of race and identity. “People seem to really be able to relate to the statements. They seem eager to be a part of the work and want to think about what admissions they could provide to the series.”

Having begun studying textile art in 2006, Huxtable believes there is an alignment between the medium and her exploration of race politics. “There is something comforting in the slow, tactile process of textile art that seems to ease the often-heavy emotions involved with making that sort of work. When I do fine embroidered, text-based pieces it takes hours and often weeks to complete, and I really get to sort of process everything as I work. It's cathartic.”

Speaking of The Scene , Office Of MP Megan Leslie