Ehryn Torrell’s Self-Similar explores the after effects of the Beijing Olympics and the Sichuan earthquake, looking at man-made structures through the lens of memory and imagination. 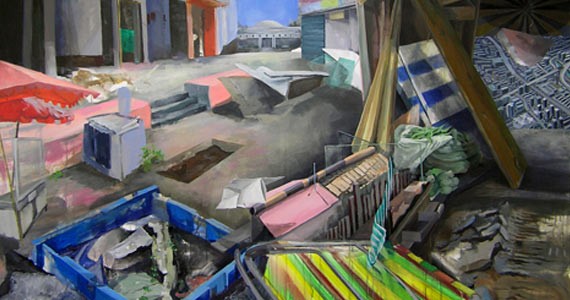 Artist Ehryn Torrell finds inspiration in gutters---she talks excitedly about the surprising hints of colour you'll often discover amongst the gray palettes of mud and concrete: "Whether it's a gum wrapper or a bracelet or a sock, there's always pops of colour," she says. Torrell's exhibition of paintings, Self-Similar opens this week at Saint Mary's University Art Gallery. Like the palettes she chooses, Torrell's paintings feature man-made subject matter: urban buildings caught in chaotic states of flux.

Self-Similar is the result of Torrell's 2008 travels in China, where she witnessed the after-effects of two major events: Beijing's summer Olympics, which wrapped up five weeks prior to her visit, and the Sichuan earthquake, which devastated several areas of China five months before she arrived. Torrell lost herself in the streets of Beijing, a rapidly modernizing city with over 3,000 years of recorded history: "I wanted to witness what to me seemed like one of the biggest construction projects in recent history."

Torrell posted up in a hostel in a hutong---one of Beijing's many winding alleyways being demolished at an alarming rate to make way for new developments. Each morning, she noticed that a worker had moved a pile of bricks outside her hostel a little further down the street. The small actions of this solitary worker inspired her painting "G22065" (2010), in which a human figure stands atop a colourful mountain of garbage and detritus, moving wreckage around one piece at a time. Another panel depicts only the garbage landscape---a peeling floral mattress bursts with pinks and reds, grayish plastics crinkle and crumple in the sun and bits of wires snake their way like rivers through splinters of wood and disintegrating fabrics.

In the beginning, Torrell faithfully painted each scene as she saw it, but she later began approaching this body of work as a collage artist working from memory and imagination. "Aspects of Voyeurism" (2011) depicts an imagined apartment building assembled almost entirely out of odd windows and doors. Based on buildings she'd seen in Shanghai, the painting prompts viewers to wonder just who these creative scavengers who live off a city's refuse might be.

Most of Torrell's work is teeming with life and energy, but doesn't feature humans at all. Instead, she creates what she describes as scenes that function "kind of like a stage set," where viewers can insert themselves into the picture. She often paints vacant structures, because it forces viewers to become "somehow involved or implicated" as they witness each scene without anyone there to distance them from it.

When you view paintings like "Apartment" (2009), depicting a crumbling stone apartment building with twisted wire balconies and collapsing walls, you can't help but imagine yourself standing beneath it---or inside. Though "Apartment" was prompted by a real scene Torrell witnessed, it's not immediately distinguishable as so: "I'm interested in how images of neglect and demolition look devastatingly similar to images of a bomb site or a earthquake site."

"Mahjong" (2009), a painting she created after a trip to Dujiangyan, doesn't generate the same degree intimacy in viewers: a crowd plays the game Mahjong in the streets, beneath disintegrating brick buildings. It's a resistant act in the face of catastrophe. Yet, viewers can distance themselves from the events in the painting---they are happening to "people over there," not "us." It's this very gap that Torrell's Self-Similar seeks to expose and collapse.