PETA asked to change the name for our Harbour Solution. Kelly admitted the plant has no name. The Coast says, "Our Readers can name it. And we'll give them a prize." 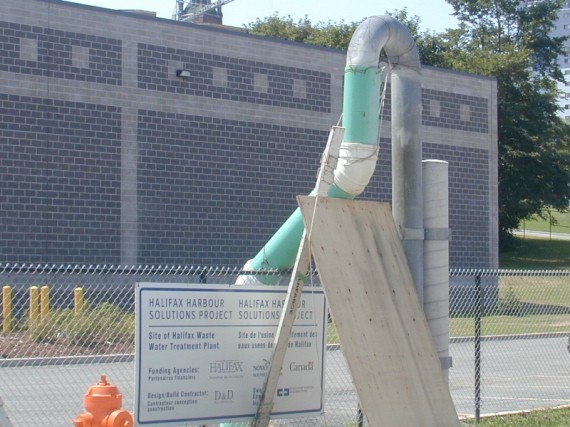 Last week, People for the Ethical Treatment of Animals made a news splash with their suggestion that they could buy naming rights to Halifax's failed sewage plant. Of course, there's no chance at all that the city will take PETA up on the offer, but it got us here at The Coast thinking: Why doesn't the plant have a name?

Last year, the city of San Francisco had a referendum on the question of renaming its sewage plant the George W. Bush Sewage Plant. But that effort failed---evidently, the voters realized that San Francisco's sewage plant is actually functioning and providing a useful public service, unlike the former president, who made everything he touched even crappier.

Still and all, here's Halifax's sewage plant, sitting on Upper Water Street, busted, a source of great embarrassment, not to mention stink. And it has no name.

Surely you readers can come up with a fitting name, and so we're turning it over to you. Whoever of you comes up with the best name, as deemed by other readers, will win an utterly crappy prize.

Here are the rules:
1. Propose a name, in the comments to this post. The first person to suggest a particular name has rights to that name and any variations on that name (i.e, you can't trump an earlier commenter's suggestion of the "Peter Kelly sewage plant" with the "Peter J. Kelly sewage plant."
2. Entries must be received by 12 noon Friday, August 28.
3. All suggestions will be posted on thecoast.ca as a readers' poll. That poll will be open until 12 noon Monday, August 31. Top vote-getter wins.

The crappy prize: Uncle John's Bathroom Reader Puzzle Book #3, a $15.95 value graciously donated by the good folks at Atlantic News, PLUS bragging rights and periodic mention in The Coast.