Convention centre costs: up to $170 million without furnishing and equipment

April 30, 2010
Until today, the public discussion about a proposed convention centre in downtown Halifax revolved around a government expenditure of about $100 million. That amount would pay for the public portion of the proposed complex---that is, the convention centre proper. Construction of the adjoining hotel and office complex would be paid for by the private developer, Rank, Inc.

Readers will recall that I've criticized the government for releasing only redacted copies of four reports that analyzed the business case for the convention centre. To his credit, provincial infrastructure minister Bill Estabrooks reversed that decision, and today all four reports were put live on the internet.

Still, while the documents placed on the internet are a vast improvement from the earlier released versions, there were still some redaction. In particular, key clauses in a report compiled by Criterion Communications Inc. were blackened. But, those blackened reports can be read by simply copying them and pasting them into a Word document, which reveals the redacted text as simply text. One passage, in particular, is the "money quote":

Recent experiences in North America suggest a construction cost for a centre incorporating a mix of exhibit, meeting and ballroom spaces in the range of $400 to $500 CDN per sf., depending on the proportion of various spaces with different degrees of finishing. For a 300,000 - 340,000 sf centre this would correspond very roughly to a construction cost in the range of between $120 and $170 million CDN, exclusive of design, furnishings and equipment costs.

There's no indication what the costs of "design, furnishings and equipment" will be, but a safe guestimate would be $30 million, so let's just call it an even $200 million for the public costs of the convention centre---TWICE that previously discussed.

Update, 5pm Friday: After The Coast announced the work-around for the redacted Criterion report, the report has been un-redacted.

Here's a screenshot of the original redaction: 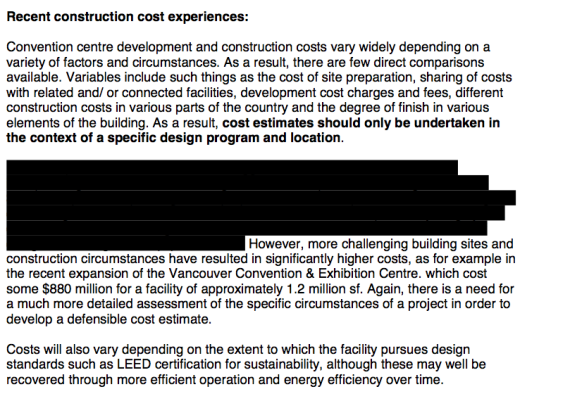