Cooking in a Tall Ship is like cooking at home, until there’s a storm

Bluenose II chef Dale Roberts is still whistling a happy tune after 12 years in the galley. 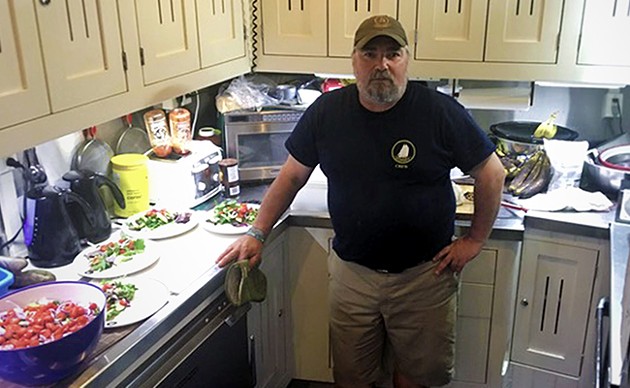 Life at sea seems romantic. A Tall Ship’s foresails fraught with salty wind, and mist breaking on the bowsprit as it stabs its way through the cold, pounding waves of the Atlantic. Nimble deckhands scramble up webbed rigging to a perch high above—unfathomable waters swirling darkly below while the horizon stretches boundless and bright—to shade their eyes with a sunkissed hand and watch pods of dolphins or the torpedo jumps of a school of flying fish.

I picture the Bluenose II sailing the Atlantic, the crew casting fishing lines into murky depths, pulling in flopping albacore or maybe even a shark. Stews cooking in fat-bellied cast iron pots placed on sheet-iron stovetops, seasoned with nothing but the salt in the air. I pictured an orange rolling out of a burlap sack. (Scurvy is real!) Maybe there would be a live goat on board. (I don’t know!) Maybe Chris Hemsworth would fight a whale.

Life at sea, of course, is not that. At least not in the galley.

“I can make anything and everything in there,” Dale Robarts says of the galley in the Bluenose II. It’s a small kitchen, but there’s nothing quaint or antiquated about it. There is a traditional oven and stovetop, a commercial-grade microwave, a small grill and all the appliances a chef could need. Appliances on boats are gimbaled to accommodate the movement of the ocean, and there are pot restraints to keep everything in place as he cooks. Robarts can turns out meals from bacon and eggs to a turkey dinner with all the trimmings. “Every boat differs. It’s compact, but you make it work.”

Robarts has been the chef on the Bluenose II since 2005. He, like the ship, is from Lunenburg—“that’s where I escaped from,” he says with a laugh—and he worked in both the fishing industry and in restaurants, like the Grand Banker, which sits down on the Lunenburg waterfront near the Bluenose berth. “I enjoy this quite a bit,” he says of sailing life. “More than working in a restaurant, for sure.”

Cooking on the Bluenose doesn’t actually have too many challenges. They stock up their groceries at port—the ship actually spends more time at port than at sea—and it’s essentially just like cooking at home. Unless there’s a storm.

“When you’re out in a storm she leans over quite a bit, time to time,” Robarts says. “You just have to make sure everything is locked down and put away so nothing is flying around the place. And you plan. If you know it’s going to be rocky weather, you don’t plan a big meal: you plan soups and stews and stuff like that that’s not going to be all over the place. Stuff the crew can handle. If you’re out in rougher weather the crew doesn’t eat as much.”

The ship’s crew is made up of a small group of officers—the captain and a few others, like the chief mate, second mate, engineer and chef—and around a dozen or so deckhands. “The deckhands are anywhere from 18 to 25. They eat pretty much anything and everything,” says Robarts. “They’re new each year so it’s always nice to meet new youngsters coming in and learning to sail. That keeps it interesting.”

The deckhands eat in their own area on the ship. “There’s a beautiful table that was put up for the crew to eat,” Robarts says. “It’s made of pieces of wood and artifacts from every province, with a three-ounce piece of gold embedded in there.” The captain and the officers eat in their own, separate, salon. “It’s like old British-style rules on boats,” he says.

Not many of those other old-fashioned rules are actually in use. “There are still some superstitions, though,” Robarts says. “Like, you don’t whistle. The only person aboard the ship that’s allowed to whistle is the cook. They used to say that whistling would call up a bad wind. But the cook is allowed to whistle, because then the captain knows that he’s not eating all the grub.”