At every world gathering there are cops silencing the voice of the people. Copenhagen is no exception. 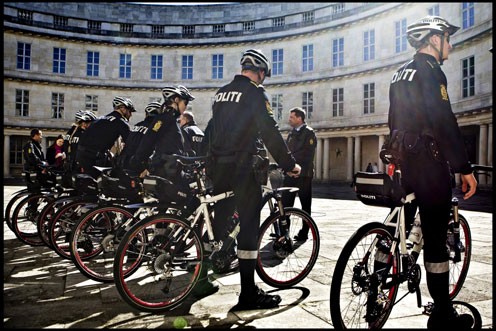 Danish Police in question may or may not be on green bicycles like in this photo.

My friend Brad Axmith, a Canadian who has been living in Copenhagen for a number of years, wrote me this week. He calls himself a centrist and a “concerned bystander trying to take note of the changes being instituted in my children’s land of birth.”

He is also a scholar with an astute eye for politics. I asked him what he knew about the overnight police raid of the building where hundreds of environmental activists are staying. (Five more activists were arrested today.) His response says a lot about the state of politics in Denmark, and indeed the world.

Axmith points out that just three weeks ago, just in time for the climate conference, the Danish parliament gave police sweeping powers to pre-emptively arrest and detain anyone they suspect might possibly cause trouble at some point, somehow. With powers like that, no wonder Greenpeace has to scale buildings just to get a sound-byte in the news.

Police are regularly given the power to silence the voice of the people. That is why when the vast majority of public opinion favours urgent action on climate change nothing happens.

Here is an excerpt from his letter:

Getting to how and why the police stormed a building where hundreds of activists are staying during the conference, it is the first action executed under new powers granted by police just three Thursdays ago; but it is also the culmination of a trend of criminal legislation designed to limit, frustrate and most importantly deter any behaviour deemed a threat to public peace.

The legislation, called the “agitator package”, is best described as established legal grounds for the police to act pre-emptively, detaining individuals for up to 12 hours without charging them—serious habeas corpus trespass—or charging them with a hefty fine and up to 40 days in the slammer. Even worse is a broadly written passage about detaining individuals who are in the vicinity of a demonstration if the police suspect the event could threaten the peace.

There was very little debate in the public sphere about this law when it was under consideration, and those few, like myself and my kids, who managed to show up in protest are feeling like an endangered species. More sobering is the threat that constantly hangs over my head of getting ejected from this country, regardless of my kids, should I stumble into the laws punishing path.

A year ago, after some high-profile knife attacks, the parliament passed a zero-tolerance knife prohibition, making it illegal to carry a knife in public, subject to immediate criminal conviction. This resulted in a fisherman and an early-childhood educator getting fined and doing time. The teacher is no longer able to work because of a criminal record, even though the knife he had was in his trunk with his camping equipment.

In Denmark there is no constitutional court that can override the government, no check on their power to trespass on the rights of citizens. So there is no countervailing authority to moderate the government's anti-demonstration legislation, which seems crafted for a law-enforced international conference but is in fact just another brick in the wall.

Tuesday night’s raid yielded 193 homemade shields, paint bombs and milk boxes that the city's vice-inspector insisted could have been used toward unlawful results. It's like that Philip K. Dick sci-fi story about prosecuting criminals, before they perpetrate crime, using soothsayers' visions as irrefutable evidence. No one was arrested under the 2:30 am action, but the state dealt a significant blow against civil liberties and strengthened its monopoly on power.

As a Canadian I have developed a strong appreciation for the Senate and our charter of rights. At the very least incompetent demagogues can't legislate lunacy that flirts with fascism without further readings in another, potentially more critical-minded chamber.