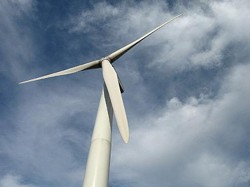 Halifax council Tuesday punted on a decision on new zoning rules for wind turbines. Currently, no new windmills can be erected anywhere in HRM; existing windmills are grandfathered in and may remain. After two years of study and public input, city staff had brought forward a proposal that nearly completely bans wind turbines in the urban areas, with the exception of relatively small (less that 60 metres high) turbines, which will be allowed in tightly designated areas in business parks. In rural areas, however, turbines would be allowed, and this is the contentious issue.

Most controversial are proposed rules around very large, industrial turbines, those taller than 60 metres and with more than 300 kilowatt generating capacity---the type of turbines found in wind farms that sell commercially to utility companies. Such a farm has been proposed for the Jeddore area, and has generated much resident opposition.

The proposed rules would require the turbines to be set back from adjacent property lines by a distance greater than one-and-a-half times the height of the turbine, and from “habitable buildings”---houses, schools, businesses, etc.---by 550 metres. As some industrial wind turbines can exceed 200 metres in height---taller than the Tufts Coves smokestacks or the Maritime building on Barrington Street, opponents say the setback distance should be increased to at least 2,000 metres.

Council heard about four hours of public testimony Tuesday, then asked staff to bring back more information about how other governments regulate wind turbines. Council is expected to make a final decision at its next meeting, on August 2.