Waye Mason asking for a staff report to withdraw HRM’s offer to the province and explore “other public use” for vacant downtown site. 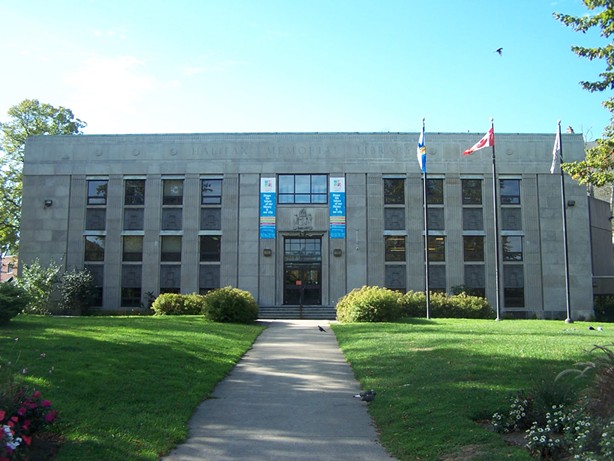 VIA HRM
Everybody seems to agree something should go in here.

The area councillor says it's time for HRM to take back control of the old Spring Garden Road Memorial Library.

At the next meeting of Regional Council, Waye Mason will request a staff report looking at formally withdrawing HRM’s offer to return the old library back to the province.

“My feeling is a lot of people have said they're interested and nothing has happened,” says Mason. “I want to get it focused back on track...We can't let it sit there forever. It's costing tens of thousands of dollars a year to secure and heat an empty building that's looking more and more decrepit and not adding to the life of downtown.”

The Halifax Memorial Library was built in 1951 on provincial lands. It’s sat vacant for the last three years, ever since the Central Library opened up down the road.

Two years ago council voted to return the property to the province with the hope it would become a new home for start-up hub Volta Labs. But the province never reacquired the land, and the talks with Volta—who recently doubled-down on office space at the Maritime Centre—evaporated.

Now Mason says a number of organizations are  “kicking the tires” on proposals for the site. One of those groups is the Conseil du Grand-Havre (CCGH).

“We have nothing confirmed at the moment, but we’re interested,” says CCGH spokesperson Victor Tétrault.

The Acadian community group wants to use the land as a permanent home for the Université Sainte-Anne’s Halifax campus, along with some of the 29 Acadian and Francophone non-profits currently renting office space all over HRM.

“It'd be nice if we could have a common area for them, and have offices built where they could consolidate the rent they're paying,” Tétrault says. “It would also be giving us more of a sense of community and a base where we could operate from.”

The tentative proposal is part of “holistic” plan for Halifax that would also include an Acadian cultural centre at the Library and a new Francophone school at the Bloomfield Centre.

Any renovations costs could potentially be absorbed by accessing federal funding, says Tétrault, along with provincial contributions and raising money from within the Acadian community.

But the plans—and virtually every other possible use for the property—is currently off-limits. The agreement between HRM and the province says the land can only be used for a library or public park. Mason’s motion seeks to remedy that land-lock by asking the province to loosen the requirement to include “other public use.”

The believes that go-ahead from the province should be granted before any serious proposals are assembled or considered.

“It doesn’t make sense to ask these outside organizations to spend a pile of money and energy if they don’t know if it will be accepted,” he says. “[The province] should just hand it over to HRM to take care of.”

Halifax could also use the library to house some of the municipal archives, which Mason says would qualify as a library. Or the city could just tear it all down.

Council already voted to do just that before offering it to the province. Mason’s latest motion once again asks to bring out the wrecking balls and demolish the structure should no appropriate use for it be found.

“I don’t want to tear it down, but also it has to be used by somebody,” he says.

The old library has cost HRM nearly $400,000 in security, snow removal, heating and pest control since it was vacated.

Mason says the property is still in a “medium-to-good” state, save the basement mice.

“It’s not in horrible condition,” he says. “It’s just that it was a building built for a very particular use, which makes it very hard to convert it to anything else.”