COVID-19 news for the February 15 week

Nova Scotia only has one case today! That's a relief after getting 14 cases over the last five days.

"The case is in Eastern Zone and is related to travel outside the province," says the provincial C19 press release update. "The person is self-isolating as required."

And we didn't mention yesterday, but the person who's been in the ICU since late January is indeed still there. Assuming it's the same person. Nobody else among the province's 19 active cases is in the hospital.

A recent record for infections 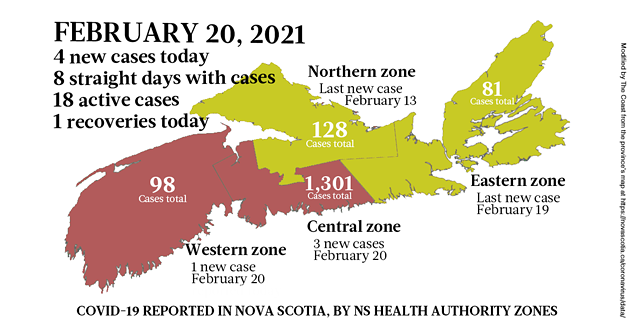 There are four new COVID-19 infections today in Nova Scotia, which is relatively high for the province. We haven't had so many cases in one day since January 27, nearly four weeks ago.

"One case is in Western Zone and is related to travel outside Atlantic Canada," says the province's C19 update. "The other three cases are in Central Zone. One is a close contact of a previously reported case, one is under investigation and one is related to travel outside of Atlantic Canada. All four people are self-isolating as required." Note how the Central case that is potentially community spread just got tucked in the middle there, between the less-threatening cases: "one is under investigation."

When the province has to investigate further to find the cause of a case, it sucks for two reasons. First, it means there's no obvious travel connection and/or relationship to a previous case, leaving the other option unpredictable community spread, which leads to lockdowns to control it.

Second, when the investigation turns up a less-obvious travel/previous case connection after a couple days, and the threat of community spread is ruled out, the province is HORRIBLE at letting the public know. So we all have the threat of community transmission looming over us until several days go by and top doc Strang hasn't said there's community spread. This lack of consideration for the public can't help but be adding to pandemic fatigue.

Finally, with three of today's four cases in the Nova Scotia Health Authority's Central zone, Central sure blew through that 1,300-case mark we talked about yesterday. 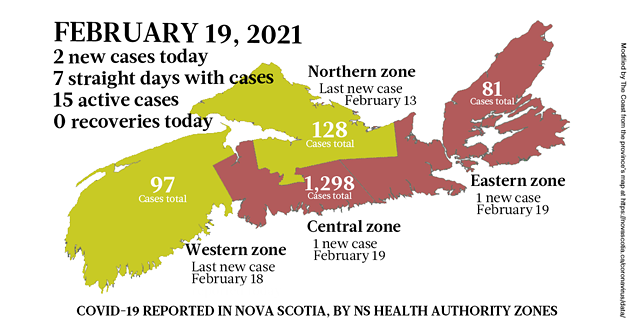 Today's two new cases are comfortingly straightforward—no school infections, no threat of community spread. "One case is in Eastern Zone and is related to travel outside Atlantic Canada. The person is self-isolating, as required," says Nova Scotia's COVID-19 update to media. "The other case is in Central Zone and is a close contact of a previously reported case."

That one patient (assuming it's been the same person all along) remains in the ICU. They are the only one of the province's 15 active C19 patients sick enough to be in the hospital. But they sure are sick: this is day 21 in intensive care, three full weeks.

The one case today in the Central health zone brings the area to 1,298 total cases during the pandemic. That region, which includes Halifax, has had 10 times more C19 than the next-most-infected region in Nova Scotia (that would be Northern, with 128 cases). Central is now closing in fast on a milestone 1,300 cases, but it's hard to say how fast. In the last week, Central's had days with zero, one, two and three new cases, so the mark could arrive tomorrow, or it could be several days away.

How long do you think it will take?

In other news, the provincial state of emergency has been renewed yet again. Premier McNeil has proven fond of the SOE since the declaration was first made—for a two-week period—last March 22. It's been renewed every two weeks since. Given today was McNeil's final C19 press briefing as premier (our full story on the premier's last presser is here), it's not the least bit surprising he'd want to tack on another SOE extension as a parting gesture.

Another case “under investigation" 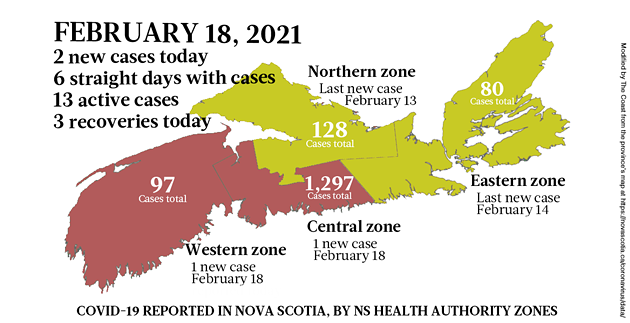 Nova Scotia has two new cases since yesterday's regular COVID-19 update. One of them was reported last night around 9 o'clock, because the case is connected to Beaver Bank-Monarch Drive Elementary School, and the province wisely doesn't wait around for the regular update to alert the public to C19 at schools.

BBMD and its patient are located in the Central health zone, and the school's shut down until at least next Tuesday. That gives time for the place to be thoroughly cleaned, the case to be thoroughly contact traced and the populace to get tested. According to the C19 update, the province is dispatching help to the area.

The public health mobile units will be at the Beaver Bank Kinsac Community Centre, 1583 Beaver Bank Rd. today, Feb. 18, and Friday, Feb. 19 to work closely with the families and staff of the Beaver Bank-Monarch Drive Elementary School. On Saturday, Feb. 20 from noon to 6 p.m. and Sunday, Feb. 21 from 9 a.m. to 6 p.m. they will be conducting community-based testing. Anyone can drop in or book an appointment online.

School cases are never good news, since they jeopardize the provincial education system and therefore both our current and future economic well-being. But of today's two infections, the BBMD case isn't even the scary one, because the source of the infection is known. "The person is a close contact of a previously reported case," says the province's update.

It's the other case we're worried about. Here's why, straight from the update: "The case is in Western Zone and is currently under investigation."

"Under investigation" always raises the spectre of community spread, out-of-control viral transmission with no known cause or vector. And until recently, the last time Nova Scotia had an infection that needed to go under investigation was January 24. Now all of a sudden we've got three—two yesterday in Central and today's case in Western—plus the province is saying the "Nova Scotia Health Authority recently issued an exposure notification for the New Minas"—that's Western—"area. Anyone who was in those areas is being encouraged to book an appointment for a COVID-19 test." (If that could be you, click here for details from the NSHA's exposures site.)

We really hope this isn't the start of something.

Another case in a school

Just when it felt like we'd made it though another long pandemic day, the province emailed an alert to media. "Nova Scotia is reporting one additional case of COVID-19, identified today, Feb. 17, connected to Beaver Bank-Monarch Drive Elementary in Central Zone," says the alert, which we received at 8:50pm. "The person has not been in school since Feb. 12 and is self-isolating. The school will remain closed to students until Tuesday, Feb. 23."

Beaver Bank-Monarch Drive's site has an announcement about the case. "While the school is closed, our staff will support students to continue their learning," it says. "We will provide an update to families on Monday regarding school reopening."

This is the first school case in February, and 25th of Nova Scotia's second wave. For more information, our listing of cases in schools has them all. 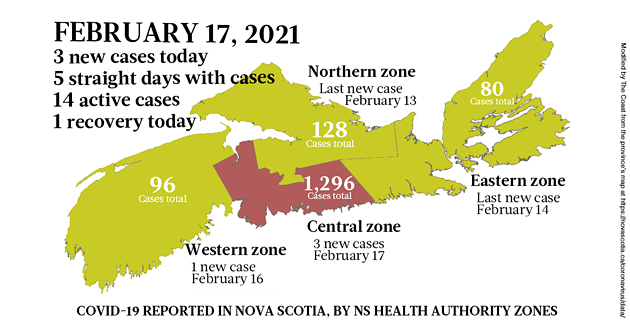 Reporting three new infections, today Nova Scotia reaches 1,600 cases during the pandemic. That is a real, and unwelcome, milestone. But it could be worse. Manitoba got 75 new cases today, to pass 31,000 total.

Back to the Nova Scotian details, one patient recovered since yesterday's COVID-19 update, leaving the province with 14 currently active cases. And like every day since January 30, one person is so sick with C19 that they are in the ICU. (As we predicted yesterday, the province has no time for us wondering if it's been the same person in intensive care, or different patients. "We are unable to provide any further details on hospitalizations," says a media spokesperson. All we get is this line from the case report: "One person is currently in hospital, in ICU.")

The three new cases are in the Central health authority zone, and they're all ominous. "One case is related to travel to New Brunswick. The person is self-isolating, as required," says the province. "The other two cases are under investigation, as more information needs to be gathered." That "under investigation" term is code for "we're really hoping that further contact tracing will tell us this isn't uncontrolled community spread." But community transmission or not, with three cases both yesterday and today, Nova Scotia hasn't had this many cases in a couple of days since January 21-22.

"Six cases over two days is a low number, but it is the most cases we have seen on consecutive days in close to a month," premier McNeil says in the update. "It is a reminder that COVID-19 is still here, with active cases in every health zone in our province, and that is why we cannot let complacency set in."

McNeil's coronavirus colleague, top doc Strang, echoes the premier's warning tone. "As we've seen in other provinces, the situation can change rapidly. We must continue to remain vigilant and follow public health protocols." 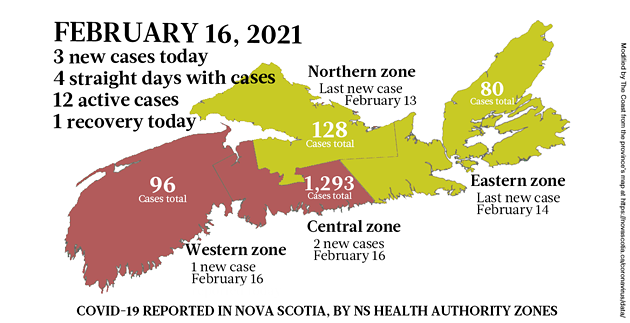 The holiday-ish days keep coming, with today's forecast of an epic freezing rain storm shutting down plenty of schools and businesses across the province, although not quite as many as Nova Scotia Heritage Day yesterday. While the storm was a bit of a bust, at least in Halifax, the coronavirus came on stronger than it has lately, giving Nova Scotia three new cases.

In comparison, the humans had just one recovery, and there remains a patient sick enough with COVID-19 to be in the ICU. If this is the same person who was first reported as going into the ICU on Saturday, January 30, today marks 17 days for them in intensive care. (The province doesn't like to say much about patients, but we've asked anyway, and will let you know what we find out.)

January 30 also happens to be when Nova Scotia last had this many new C19 cases in a single day. Not that we need to raise an alarm—three cases is nothing next to, say, the 263 new cases Alberta has today. And these cases seem contained. "One case is in Western Zone and the other two cases are in Central Zone. All cases are related to travel outside Atlantic Canada," says the province. "The people are self-isolating, as required."

But we'd rather have zero.

Have a happy holiday, if you get one 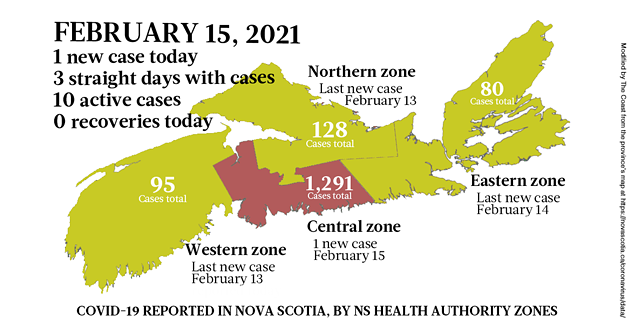 It's Nova Scotia Heritage Day, this year honouring Edward Francis Arab. Everybody gets a day off today—except for people who work for the federal government (Canada Post, the military), or businesses regulated by the federal government (banks don't have to close), or institutions that can't ever totally shut down (hospitals, especially the intensive care unit that continues to treat that one hospitalized COVID-19 patient), or a host of retail businesses the province lists that are allowed to open "like gas stations, restaurants, convenience stores, and drug stores."

In other words, if you get a holiday today, enjoy it. Because lots of people can't.

For what it's worth, C19 isn't taking a holiday, as Nova Scotia is reporting one new infection. "The case is in Central Zone and is related to a previously reported case," says the province's update to media. "The person is self-isolating, as required."

Despite the holiday and the fact recently elected Nova Scotia Liberal Party leader Iain Rankin is supposed to be taking over, outgoing premier Stephen McNeil is apparently also working. He added some words of encouragement to the update, appropriately themed to the moment: "As we celebrate Heritage Day today, let's draw strength for the rest of the pandemic from the many Nova Scotians who weathered hardships and took bold steps to advance our people and our province."