COVID-19 news for the February 8 week

Sorry about that, Eastern zone 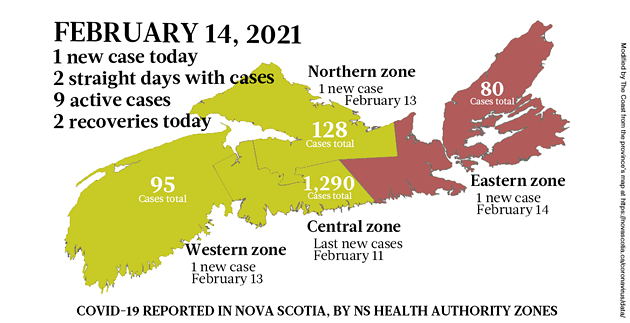 Yesterday we were so fixated on the new case in the Northern zone, which tipped the zone's status on our map from all-clear green to alarming red, we didn't realize the Eastern zone should have changed status, too. Saturday was Eastern's 15th day in a row without a fresh infection, so it deserved to switch from cautious yellow—indicating there's been a new COVID-19 case within the last two weeks—to comforting green on the map. "No biggie," we assured ourselves when we noticed the mistake. "Eastern can just go green on Sunday."

Unfortunately, Eastern can't just go green today, because the one new case Nova Scotia is reporting is there. Eastern has to go red. At least the case is travel-related, and the province assures us the patient is in self-isolation, so it's not an inherently scary situation. But we're sorry about denying Eastern its day in the clear.

If there's any silver lining to getting a new case, it might be that going red is on-brand for February 14. "This Valentine's Day, let's show each other love by following the public health protocols put in place to keep each other safe," says premier McNeil in the provincial C19 report. "COVID-19 is still here and we can't let our guard down."

It was green while it lasted 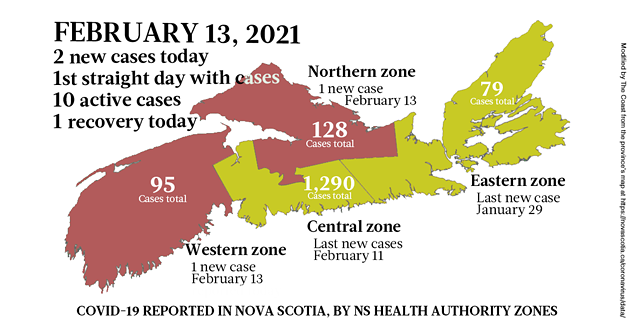 The province is reporting two new COVID-19 infections. "Both new cases are related to travel outside Atlantic Canada," says the update to media. "One is in Northern Zone and the other is in Western Zone. Both people are self-isolating, as required."

Besides it generally sucking to get cases again after a day without, this means the Northern zone reverts back to red status on our Nova Scotia C19 case map, after seven straight days in green. The green indicates health zones that haven't had a case for two weeks, which is generally understood as a full incubation cycle for the virus.

In other sucking news, the person who's been in the ICU for the last two weeks—assuming it's been the same patient all this time—is still there. Saturday is day 15 for them. 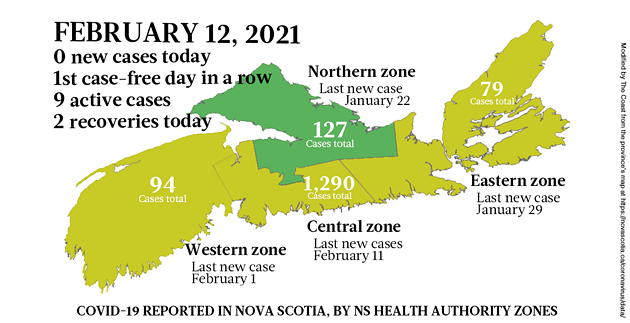 After a string of five days in a row with new infections, Friday comes through with a zero day. Also, two COVID-19 patients have recovered, bringing active cases back into the single digits at nine. Nice work, Friday.

The only blemish on the provincial C19 report is that one person is hospitalized, with symptoms severe enough to require the ICU. Assuming this is the same person who's been in intensive care since Saturday, January 30, today marks 14 ICU days for them. That's an awful lot of days. We hope they recover soon. 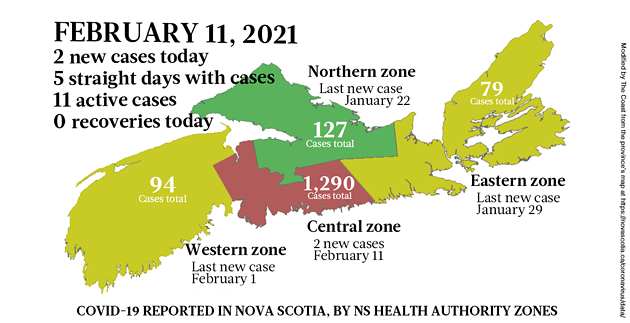 Last night, the province send out a press release about test results that came back yesterday from the National Microbiology Lab: "Two additional cases of the UK variant of COVID-19 have been identified in Nova Scotia." With the first identified case of that variant announced January 22, the province now knows about three cases.

The press release explained that the two patients involved were reported in January as Central zone cases, and they'd subsequently recovered, but given the variant connection the province wanted to take another look. "With this new information we are being cautious," top doc Strang said in the release. "We are asking the people connected to these cases to get retested and NSHA will reissue the potential exposure notice for the two cases."

Sure enough, at 8:12pm yesterday we received a press release from the Nova Scotia Health Authority, warning about potential C19 exposures at a small shop around Quinpool Road on Wednesday, January 20, from noon to 1:30pm, and a housewares store in Bayers Lake on Friday, January 22. We are on record as being uncomfortable about parroting these notices—the NSHA finally got an exposures database of its own that identifies locations more thoroughly, and less gossipy, than any media outlet could—although a special situation involving the extra-transmissible B117 coronavirus variant made us take another look.

Then today the NSHA issued a correction, saying the concern about the Bayers Lake store was not Friday but actually Saturday, January 23, 5:30-7:30pm, and our caution felt justified. But now we feel safe saying if you were out shopping in the Quinpool area around lunchtime a few Wednesdays ago, and/or in a home store a few Saturday evenings ago in the Bayers Lake Industrial Park, you should check the official exposures website for more details about the two locations. If you were in the same place as someone known to have the B117 variant, the province wants to know.

"Yesterday's news of two more cases of a COVID-19 variant being in our province last month is yet another reminder that we must remain vigilant in the battle against the virus," premier McNeil says in today's regular C19 update. Nova Scotia is reporting two new cases in the Central health zone (both related to previous cases), no recoveries and still one patient in the hospital in the ICU. But those case numbers are routine; the news about the B117 variant is your first piece of bad news.

The second is about Newfoundland and Labrador, which Nova Scotia had to kick out of its trust bubble this week because of a sudden surge of cases. Today Newfoundland is reporting 100 new cases. This is the highest single-day case count Atlantic Canada has seen during the pandemic, a mark that shows the east coast's remarkable success at keeping the virus under control can turn any time.

Prince Edward Island peaked at seven cases in a day on March 30, early in the first wave. Similarly, Nova Scotia's maximum so far is 55 new cases, hit last April 23. New Brunswick reached its record of 36 new cases January 17, less than a month ago. Before this week's out-of-the-blue surge got to 100 cases, Newfoundland's highest daily count was also in the first wave: 32 cases on March 25.

"Outbreaks in neighbouring provinces are a reminder of how quickly COVID-19 can take hold and spread," says Strang in today's C19 update. "Only you can prevent this from happening here. Please continue to be vigilant and follow public health measures to protect yourself, your loved ones and your community."

A cold farewell from Nova Scotia 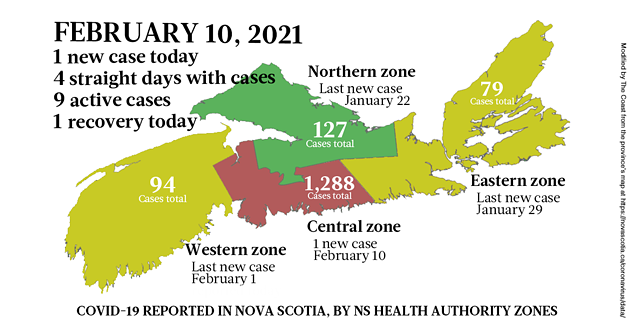 Hump Day for COVID-19 is pretty much the same as Hump Day for humans—kinda meh. Just like the last three days, today the province is reporting one new case in the Central health zone. No drama here.

There is a tiny twist in this case, because it's "related to a previously reported case" as the province's update to media says, while the other three cases in recent days were directly connected to travel outside Atlantic Canada. In other unchanging news, Nova Scotia still has one hospitalized C19 patient, and they are still in the ICU.

The media update doesn't call special attention to the day's biggest development, the requirement for travellers from Newfoundland and Labrador to quarantine for two weeks on arrival in Nova Scotia. Announced yesterday, that change went into effect this morning at 8am, but the update refers to it only indirectly. 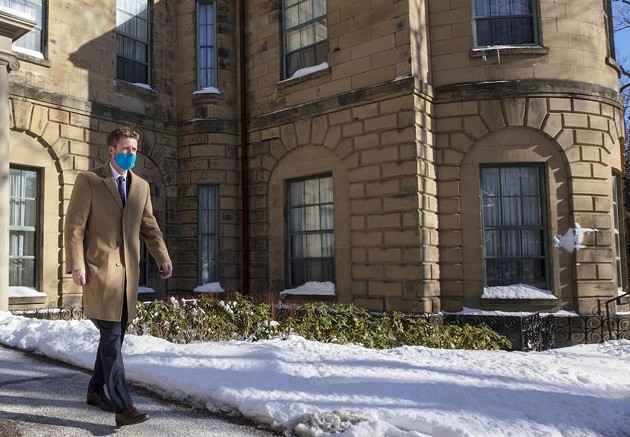 Nova Scotia premier-to-be Iain Rankin took another step toward his new office today, going to Government House to accept lieutenant governor Arthur J. LeBlanc's invitation to make a new government. (Outgoing premier Stephen McNeil is still technically in charge until Rankin gets sworn in, which hasn't been scheduled yet, although the province says the date "will be announced shortly.") It's a quaint bit of theatre that harkens back to the days when the king or queen of England called the shots in the colonies, and local leaders answered to regal stand-ins. Unfortunately, Rankin got the costumes backwards for a pandemic production.

In the province's photo of Rankin walking away from Government House, he is outdoors, not near anyone else, yet he's wearing a mask. But inside, with near-octogenarian LeBlanc, neither of them have masks. Remember, the province says "Wearing a non-medical mask is required in most indoor public places." At least Rankin and LeBlanc are physically distanced in the pic.

In other high-level government action, Nova Scotia closed the door on Newfoundland and Labrador today, due to a C19 surge. "We have had a very good run in the last number of weeks with a low number of new cases," current-premier McNeil says in a press release about the new requirement for Newfoundland visitors to quarantine when they arrive in Nova Scotia. "Other provinces have not been as fortunate, including Newfoundland and Labrador, which is experiencing an outbreak." For more info, read our story about the change.

Another new case for Central, again 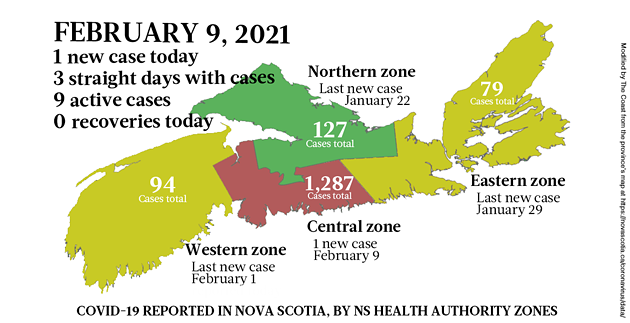 There's one new case today, in the Central zone. Like every case we've seen since last week's Groundhog Day, the province's official COVID-19 report has these now-familiar words to say about it: "The case is in Central Zone and is related to travel outside of Atlantic Canada. The person is self-isolating, as required." But don't worry, we're not going to get into that whole repeating bit again. Yet.

There's also a single coronavirus patient sick enough to require hospitalization, out of Nova Scotia's nine active cases. The province has been using this sentence in its daily updates since Saturday: "One person is currently in hospital, in ICU." Still, no talk of time loops from us.

The briefing starts at 3pm. You can watch live at novascotia.ca/stayinformed/webcast and/or @nsgov on Facebook, or catch it later at the Nova Scotia government's YouTube page. 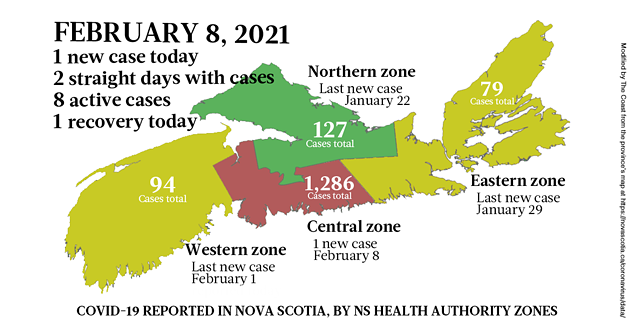 Except for today's snowstorm that brought the province to a halt, this week begins as the last one ended: One new travel-related case in the Nova Scotia Health Authority's Central zone.

In terms of active coronavirus, one person who had COVID-19 yesterday has recovered. That leaves Nova Scotia's current tally at eight patients with a known C19 case, including one who is in the hospital—sick enough that they're in ICU.

The province's COVID-19 restrictions get a little looser today! Read our story about the relaxing rules for all the deets.