COVID cases and news for Nova Scotia on Tuesday, Jun 22

Updates including briefings, infections and our daily map of community COVID-19.

NOTE: This day is now over. Click for the latest on COVID-19 from The Coast. Or for an informative look back at Nova Scotia's evolving pandemic response, keep on reading.

2 deaths, 2 cases and a vaccine breakthrough

The joy Nova Scotia felt yesterday, when there were no new cases, faded quickly in the face of today's COVID report. Two more people are dead after contracting the disease—bringing Nova Scotia's pandemic death toll to 92 people—and there are two new cases.

Five people recovered from COVID since yesterday's report, so the caseload dropped to 74 active cases. As the graph of active cases lower down this page shows, the caseload has now declined five days in a row.

Yesterday there were three people in hospital across Nova Scotia, one of those patients requiring intensive care. Today the province is reporting only two hospitalization and nobody in ICU, which feels like welcome progress. But if that reduction is due to someone dying, that's a most unwelcome way to improve the stats. (The province doesn't share that kind of medical info, so we can't know for sure.)

In testing, provincial labs processed 3,323 PCR tests yesterday, an increase from the day before but still more than 1,000 tests below the current daily average of 4,430. Vaccinations, however, took a massive leap up: Not only were 14,612 doses delivered into arms yesterday—astronomically high for a Monday—but nearly 12,000 of them were second doses, a daily double-dosing record for Nova Scotia's pandemic.

The following picture is a detail from the interactive graph of Nova Scotia's vaccination rate lower down this page. It shows that the province took about five months to get five percent of the population fully vaccinated with two doses, while the next five percent happened over the last 11 days. 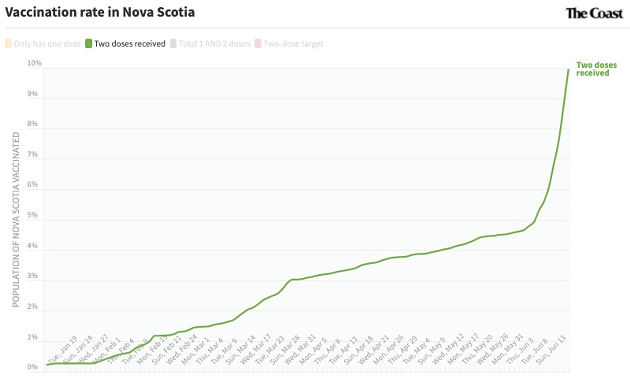 The end of August is only 71 days away, practically no time at all compared to the 15 months we've been enduring COVID. Among many changes in the works to make vaccinations happen this quickly, the province has enlisted the Armed Forces and the Red Cross to help get a (presumably large-scale) vax clinic open later this week in the convention centre.

How do you become a leader in COVID testing? Practise. Nova Scotia has many ways to test for COVID.

At today's briefing, premier Rankin announced changes to the way Nova Scotia's borders will open to the Atlantic bubble tomorrow. Because New Brunswick is already open to all of Canada, and Nova Scotia isn't ready to go that far, visitors from New Brunswick won't have the same freedom to come and go from NS as travellers from PEI and Newfoundland and Labrador. Here's our full story about the fractured bubble.

Welcome Lyndsay Armstrong to The Coast

Today is Lyndsay's first day on the job as a Coast reporter, and we're thrilled that she's joined our team. Her insightful questions during the province's COVID briefings have been impressing Nova Scotians during the pandemic, and we think it's a shame that her excellent reporting has largely remained hidden from the public behind one of the most strict paywalls in Canadian publishing. Starting today, Lyndsay's important journalism is available to everyone thanks to The Coast's membership model of paying for journalism, where some people contribute money to fund The Coast as a news source open to all.

We know you will enjoy Lyndsay's work—her first Coast byline will be a report from today's briefing—and if you are able, please consider joining us as a contributor.

Premier Iain Rankin and chief medical officer of health Robert Strang are giving one of their regular COVID-19 briefings today. It is scheduled to start at 3pm. You can watch live at novascotia.ca/stayinformed/webcast and/or @nsgov on Facebook, or catch it later at the Nova Scotia government's YouTube page.

This infographic was created by The Coast using daily case data from Nova Scotia's official COVID-19 dashboard. Our goal is for this to be the best NS COVID map around, clearer and more informative than the province or any other media organization provides. To get there we do an analysis of the data to find each day's new and resolved case numbers in the 14 community health networks, information the province does not provide. For a different but still highly accessible approach to the latest COVID statistics, check out our case table.

Case table of the health networks

The Coast uses data logged from Nova Scotia's official COVID-19 dashboard in order to provide this tabulated breakdown. The province reports the number of active cases in each of Nova Scotia's 14 community health networks, but we do the math to be able to report the new and resolved case numbers. We also map the data to provide a different view of the case information.

This interactive graph charts COVID activity in Nova Scotia's third wave, comparing daily new cases with that day’s active caseload. The dark line tracks the rise and fall of new infections reported by the province, which hit a Nova Scotian pandemic record high of 227 cases in a single day on May 7. The green area is the province's caseload, which peaked May 10 at 1,655 active cases. Click or however over any point on the graph and the detail for that moment will pop up. To focus on just new or active cases, you can click the legend at the top left of the graph to hide or reveal that data set.

A person who tests positive for COVID-19 counts as a new case, the beginning of a problem for both the province and that person. The best ending to the problem is the patient recovers from the disease. This interactive chart compares how many problems started (the red area of new cases) to how many ended (the blue area's recoveries) each day in Nova Scotia's third wave, revealing growth trends along the way. Click or hover over any point on the graph and the detail for that day will pop up, to reveal exactly how quickly things change: May 7 had Nova Scotia's most-ever infections diagnosed in one day, 227 new cases, more than triple the 71 recoveries that day. Two weeks later, May 21, had a record recoveries, 197 in a day, more than double the 84 new cases. To focus on just new cases or recoveries, you can click the legend at the top left of the graph to hide or reveal that data set.

Knowing the average number of new cases Nova Scotia has every day—the orange area in this graph—is useful to show the trend of infections without one day's ups or downs distorting the picture. Having the daily new cases as well, the dark line on the graph, gives a sense of how each day compares to the average. We use the rolling (AKA moving or running) 7-day average of daily data reported by the province; here's a good explainer of what a rolling average is.

Vaccination in the population

How many Nova Scotians already have one dose of vaccine? How many are fully vaccinated with two doses? And how close are we to the herd immunity goal of 75 percent of the province fully vaxxed? These questions are answered in our chart of the vaccination rate in Nova Scotia since the province started reporting these numbers in January 2021, breaking out people who've had a single dose separate from those who've had the full complement of two doses. Here's more information about the 75 percent target and what it will take to get there.)