Craig Leonard's Blasted History of Noise gets loud this weekend 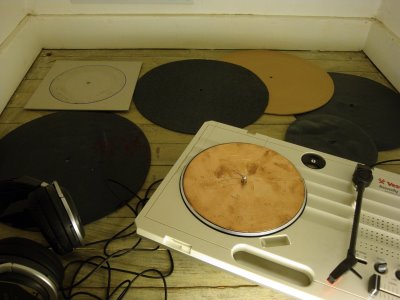 The Obey Convention arts fest continues through this weekend with Hard Light, with work by 12 young videographers at the Khyber Ballroom, Saturday from 3-5pm, $5 at the door, followed by an open video screening, which is BYOV (bring your own video art on a playable DVD, 15 minutes or less) and watch it on a big screen. Music encyclopedist alert: There will also be a segment of Craig Leonard’s A Blasted History of Noise Audio Series after the screening. Between May 22-24 Leonard will present over 100 noise albums from 1965 to today. “In a flow of samples from alternating records continuously intersecting across two turntables, Craig works his way through albums from Dave Phillips’ They Live (2009) back to Sun Ra's The Magic City (1965).”

Leonard's art practice often involves meticulous musical archival: His project Gift for the Screamers involved finding the original members of LA punk band The Screamers to give them handmade vinyl records (the legendary band never released an official album); his installation Bad Seeds at Mercer Union meticulously documented (almost Beautiful Mind-like) connections and crossovers between various bands and their members. Look for him next at the AGNS, as part of the group exhibition Sometimes Always, which explores the fleeting nature of audio technologies.

We asked Leonard a few questions about his audio series:

Are there any constants throughout the time you examined, or any old trends that have returned?
This was a question around which I structured an experimental audio course at NSCAD recently: Does "noise" have definable attributes? By looking at a range of avant-garde recordings from John Cage to someone like Sightings, I'd say yes—dissonance, volume, distortion, unpredicatability and chaos — which may be present in varying degrees simultaneously or individually.

How did you pick the albums, and then the samples from the tracks? Did you have specific criteria? That must have been a tough decision.
The records will all be from my own (growing) collection. I've been collecting with purpose and abandon since having a steady paycheque over the last few years. I've used some well-researched discographies focused on noise and avant-garde records, like Dave Henderson's "Wild Planet" article in Sounds magazine (1983) and the legendary Nurse With Wound list (1979). I've used websites like Discogs and Allmusic, and then I've just followed different paths through my own record-hunting at shops whenever I can.

The Blasted HIstory of Noise (BHN) for Obey Convention contains noise benchmarks, but it's limited by what I was able to acquire myself, and arbitrarily constrained by the upper limit that I set myself of 100. There are plenty more that should be placed in the timeline, but it would be difficult to fit many more in though in a total of 60 minutes. It takes 10 seconds just to get the record out of the sleeve!

The general criterion was that the records explore sound experimentation, and specifically noise: dissonance, volume, distortion, unpredicatability and chaos.

Is there a connection between this audio series and your Bad Seeds installation? Could you overlay one on the other?
I'd say yes in that both projects came out of a love for music, research and collecting. I couldn't overlay Bad Seeds on BHN, but the opposite is possible. As a music map, BHN would fit nicely into a tonne of interconnected sub-genres.

What compels you to document music/music history?
I'd have to answer the same as above: a love for music, research and collecting. However, I'm not interested in research and collecting for their own sakes. I have particular interests in "marginal" or "counter-cultural" artistic expression. These are the eclectic and provocative spaces where conventional culture, in whatever form, is afraid to go.