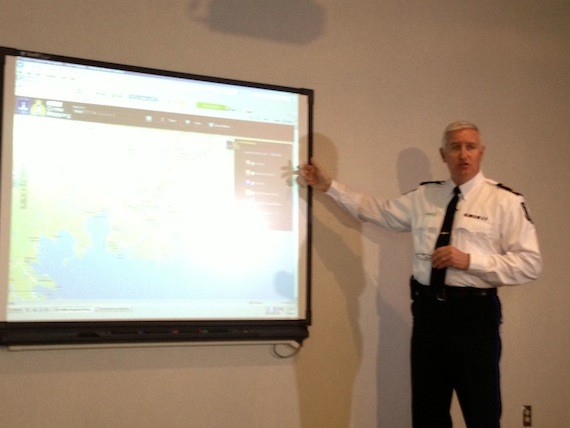 The Halifax police department has just made live a new webstie that maps police calls. See the site here.

The crime mapping site is still in "pilot" stage. It now currently tracks only five types of calls: theft, theft from motor vehicles, break and enter, robberies and assault. Notably, the category "assault" does not include all sexual assaults; deputy police chief Bill Moore explained that those assaults that occur in the home between people who know each other and are often partners, which is most sexual assaults, will not appear on the mapping because "most people aren't interested in that."

Also, currently the web site has only three time frames: the last 24 hours, the last four days and the last week. After a week, the calls disappear from the site completely. Moore explained that this will change, and that the long-range plan is for the site to contain all historic data.

Moore said that the site came about partly as a result of the mayor's roundtable on violence, and at the insistence of both the former public safety officer Don Spicer and former city councillor Sue Uteck. The Coast also has long criticized the police department for not making such information available.

The site uses software developed by the Fort Lauderdale, Florida police department, and was given to the HRP for free. Moore said no additional costs were incurred to develop the site, besides already budgeted staff time. It uses Flash, so does not work on iPhones or iPads.

Our take on the site? It's a very good first step. The department ought be congratulated for implementing it.

That said, it is just that: a first step. Now two more things need to happen. First, the site needs to be more fully developed, with all crimes, not just the five mentioned, plotted, and with an exhaustive date range.

Secondly, while the site is an excellent advance from what we have now, which is nothing, what's really needed in terms of full public information is the police blotter. The blotter is the short report written by the responding police officer to a call. It provides context that a simple map can't. It should be easy to attach that narrative to the map, which would give citizens the information they want.

For example, currently a regular complaint we hear from readers is that they'll be sitting at home at night, and a huge police operation will be going on down the street, involving dozens of officers. The resident obviously is curious about what's going on, but the next day the police release will say "there were no significant calls." It's hard to reconcile dozens of cops down the street with "no significant calls," but the police blotter would give context, and let the reader decide what is and is not significant.

But that complaint aside, kudos to the police department for taking the first step of implementing the mapping system.