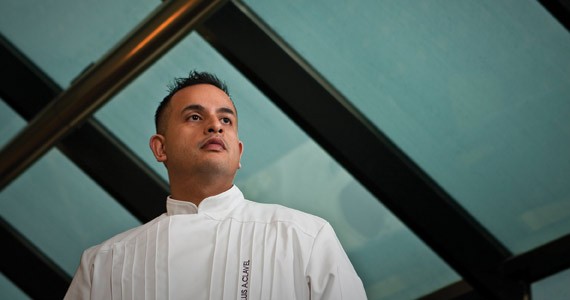 Nova Scotia has often been lucky when it comes to food. There’s a certain remarkable quality to the food here that’s hard to find anywhere else in Canada. Culinary Team Canada obviously gets it; they’ve selected two Nova Scotian chefs, Luis Clavel and Peter Dewar, to be part of the team.

Culinary Team Canada is about as elite as it comes. The chefs on the team compete in the World Culinary Olympics representing Canadian cooking to the rest of the world. With six team members and two of them cooking for Nova Scotia, it’s something to be proud of.

Dewar is a full-time culinary arts professor at NSCC in Kentville. He has been a part of Culinary Team Canada for the past few years and joined the team at the 2012 Culinary Olympics in Germany. Of his experiences on the team, Dewar feels that being around so many talented chefs has been the greatest opportunity. “I’ve learned so much from different chefs that are on the team and being able to bring that back to my students," he says. "It creates a legacy.”

Originally from New Brunswick, Dewar is well aware of how being from the Maritimes has affected his cooking style. “The bounty of different types of food here is incredible, so many different choices,” says Dewar. “I don’t think you get that anywhere else in Canada, what we have here.”

Clavel is the new recruit for the Team. If you’re lucky, you might have already had the chance to try some of his dishes at Seasons by Atlantica. “It was a bit of a fluke, my original passion was to be a percussionist,” says Clavel about his foray into cooking. “I got a job as a dishwasher at McKelvie’s and let’s just say I fell in love more with the kitchen than my own drumsticks.” Before long, Clavel was the corporate chef for Energetic Foods —the same company behind McKelvie’s effectively making him the lead chef.

“Being able to achieve some medals at the Olympics, that’s a once in a lifetime opportunity for a handful of chefs. It doesn’t happen for everybody. That’s very exciting,” says Clavel about why being on Team Canada excites him. “The biggest thing for me to get from this team, is the opportunity to learn from other chefs on this team and to be able to pass it along to my cooks. That’s why I’m so excited about it.”

But Clavel is determined to stay true to his Nova Scotian roots. “My big thing is being able to put Nova Scotia on the map as a culinary destination in Canada and say yes, we can cook.”

On July 26, Team Canada will be coming to Halifax and hosting an event at the Atlantica hotel. The menu will be the same that the team will be presenting in Switzerland and offers a chance for Halifax to see just how Culinary Team Canada cooks. Tickets will be available in a month's time, but until then you are able to contact Clavel at lclavel@atlanticahalifax.com to reserve a space.