“What happened in your neighbourhood is not acceptable to us.” 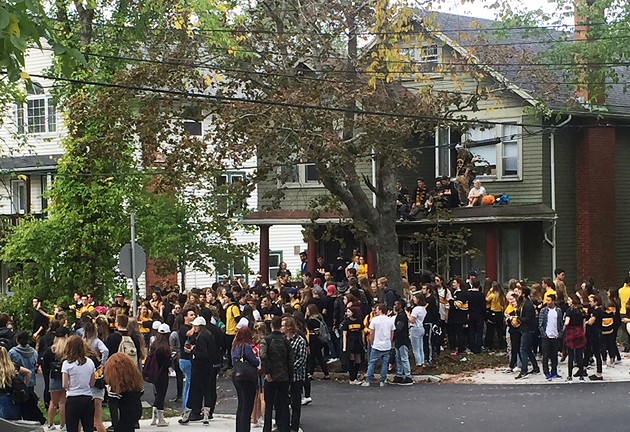 The adults at Dalhousie University are busy trying to clean up the mess after Saturday afternoon’s homecoming party/riot/debacle.

Houses around the Jennings Street scene of pro-Dal chanting, public intoxication and mass arrest received a letter from university president Richard Florizone today, inviting them to a meeting Tuesday night.

”Dear neighbour: I want to apologize for the actions of some of our students over the weekend,” Florizone opens, before promising that Dal is “working on a plan to discourage similar behaviour in the future.” Then comes the invitation: “We would like to hear directly from you to help inform our plan for moving forward.”

The meeting is Tuesday night, 7-9pm, at the University Club.

there are no specifics offered about the meeting’s discussion topics, the letter is clear on the apology front. “Again,” Florizone writes, “I am very sorry for the noise and disruption you experienced over the weekend and for any actions of Dalhousie students that made you feel unsafe in your neighbourhood.”

Along with residents and other “Dalhousie community” members, the guest list includes police reps and area councillor Waye Mason. If you want to talk before the meeting, Florizone encourages you to contact Dal’s community relations person, Karen Cairney, who can be reached by phone at 902-494-2786 or by email.