Get greedy with two impressive premieres on one bill.

Perhaps the most striking thing about last night's two premieres, presented by Live Art, was their differences. The minimalism of Susie Burpee's Apple Darkness, performed by Danielle Baskerville, seemed almost pious compared to Sometimes in Nova Scotia's over-the-top ode to greed, only emphasizing its glorious excessiveness even more. No surprise: Apple Darkness was inspired by the life and teachings of Hildegard von Bingen, a 12th century nun and saint, who preached chastity over all.

Using only the front of the stage, in front of the curtain, Baskerville successfully makes the space seem intimate, almost claustrophobic, then expansive, as she includes the far walls, doors, stairs and the mysteries behind the curtain in her domain. Props are used to great effect: Electrical cords are plugged in, pulled out, stretched and grabbed like a one-person tug-of-war. An apple is half-eaten with great aplomb, then tossed to the ground. Gorgeous a cappella choral music is played off a laptop sitting on a plain utility cart, and Burpee also uses one of the most effective but simple lighting techniques I've seen: a floor fan with a stage light behind it (lighting is by Ken Schwartz of Ross Creek, where both pieces were developed in residency).

If this is a piece about "contemporary notions of sex, gender, power and faith" as witnessed through a female body, we're living in confusing times. Baskerville lopes around amusingly like a gorilla, but also crumples, almost convulses on the ground. But she is uplifted by an invisible audience on the other side of the curtain who loudly applauds her arrival. In the age of social media, maybe we're seduced by the applause, too. 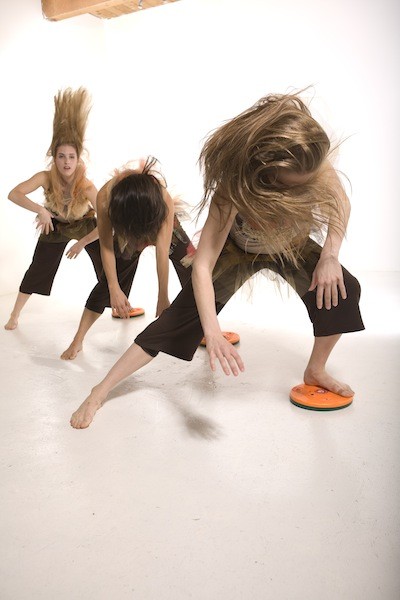 At the beginning of SINS' Hungry Like the Wolf, choreographed by Vancouver's Daelik, Jacinte Armstrong, Susanne Chui, Sara Coffin and Elise Vanderborght strut out in matching heels and cropped fur coats, carrying white handbags, like a scene from Sex in the City. But out come the wolf masks and soon the four women are moving like animals across the front of the stage, their purses standing up on their backs like tumours. Knowing this piece is about the deadly sin of greed, I kept thinking about popular but cheap fashion stores like H&M and our behaviour in them: There's an animalistic thing that happens as people circle the sales racks; just watch next time you're in there. More than anything though, these wolves (a symbol of greed) act as a chorus to this theatrical morality play.

Then the curtains open to a set, stacked and scattered with rows of about 100 white boxes. The striking effect is part warehouse, part cemetery. Cory Bowles—physically, it's great to see a solid masculine presence mixed into this piece—is obsessed with these boxes. He stacks them, they fall. He continues making towers: there's no end point to his greed. Each of the women unsuccessfully try to enter his world: there's a great, humourous scene of Armstrong and Bowles moving one tower to another location using all parts of their bodies, except for their hands. Such a futile journey: Greed has no endpoint. Vanderborght brings almost a broken sadness, and Chui, a sexy violence to her encounter with Bowles, while Coffin carries strength in her solo.

The constant carrying and moving of boxes does come very close to monotonous, like a busy assembly line, but when SINS gets to that point, they pull it out, with bursts of energy and movement that pulls you back in again. I really love these guys: they bring such a youthful perspective to local contemporary dance, and they're not afraid to take risks. I only wish that Sometimes in Nova Scotia, was All the Time in Nova Scotia. But that would make me greedy, wouldn't it?