"A long-neck ice-cold beer never broke my heart" and neither did a country music festival on PEI. 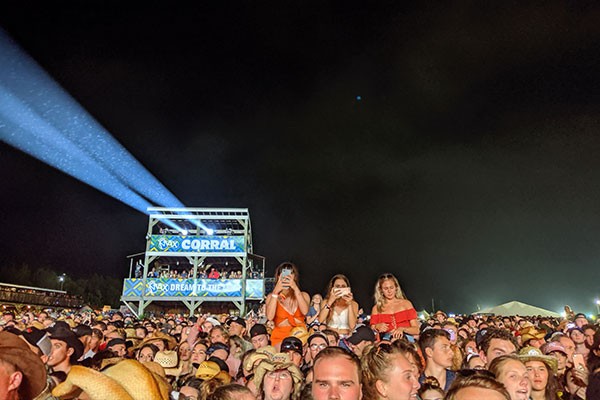 While everyone in attendance certainly didn’t know all the words to every Tanya Tucker song—as Gretchen Wilson would have preferred—festival-goers at Cavendish Beach Music Festival were certainly revelling in the town’s small-town, down-home country feel.

The country music festival took place last weekend, and amidst the heat and sweat there were indeed also tears, laughter, trucks and dogs.

As more than 60,000 people poured into the 7,500 population town, the polished machine that is CBMF in it’s eleventh year geared up for a weekend of boot-scootin' country music.

On Friday, Alberta-bred brothers High Valley definitely sang about farming and heartbreak, but also how much they love Canada, and their dad and their trucks. Headliner Hunter Hayes brought his Ed-Sheeran-like ballads to the stage, and mostly younger fans out in the crowd. Known for coercing unbeknownst pop fans into the folds of honky-tonk, the sneers from older concert goers—most of whom can afford to be away from the youth in the VIP section—tend to not give enough thanks to genre-pushing stars like Hayes and Sunday’s act, Cam.

On Saturday, after ‘mainlanders’ spent the morning visiting the home of Anne of Green Gables, concert-goers wandered the grounds collecting free things from brands who paid to be there and give out free things. You could be lucky enough to get in a photograph taken by one of Bacardi’s team of influencers, exchange your personal contact data for a chance to sit in VIP, or spin the wheel with Spinach—yes the name of  a cannabis brand—for freezies and t-shirts and glow sticks.

Then, it rained! It poured! And few people minded, because Russel Dickerson did a very good job of making the most of the weather. And most importantly, it stopped raining before America’s sweetheart Carrie Underwood and her hair extensions praised god and prayed for peace, while headlights around the world were smashed with baseball bats and the pure reverberation of thousands of angry women singing along to ‘Before he cheats.’

There were a lot of juuls, sunburns and questionable fashion and not a lot of places to refill a water bottle. (It was hot, and though water was only $1-$2, you could get a Twisted Tea for $9).

On Sunday, young female performers Runaway June (Naomi Cooke, Hanna Mulholland and Jennifer Wayne) and Cam weren’t too worried about the old and young divide. Runaway June sang Dixie Chicks and Shania Twain covers alongside its own new songs like 'I can buy my own drink', and Cam sang her tracks with Diplo and Sam Smith—Diplo and Sam Smith were not in attendance. (Hats off to Cam for being the only performer to acknowledge the 2SLGBTQ+ community.) 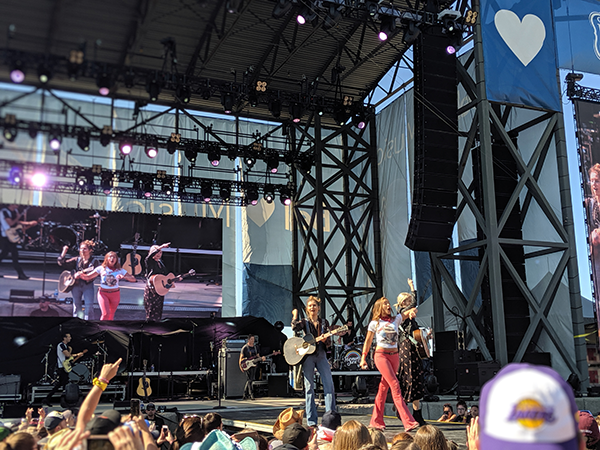 Eric Church closed the festival and Spinach’s glow sticks became a free-swag nightmare when the audience wouldn’t stop throwing them at him on up on stage. Middle-aged moms wore “Take me to Church” t-shirts and groups of young boys made like they were in dad’s shed in the middle of the crowd, singing every single word just to prove how much of a fan they were.

A dancing troupe of ladies who have been to every festival were missing the “old country” acts like Dwight Yoakam and “big names” like Johnny Reid.

Themselves a fixture at the festival every year, Those Line Dancers, is a group of two-stepping ladies led by Margot Postma.

Postma remembers when Tanya Tucker was at the festival. “Oh my gosh,” says Postma, “It was pouring rain, she comes out she says she says I sound like Johnny Cash today. And she said I sure wouldn't pay any money to come see me sing. She had on this velour suit and big rubber boots. She was a blast.”

The group of women, mostly seniors, share a love for dancing and good music and could be seen line dancing all over the festival grounds.

United by their love of moving and country music, Postma says country music in particular she “learned to love.”

“People just make the generalization and they say ‘I hate country,’” says Postma. “But as soon as I put an old song on I have a dance for it, they go ‘oh my gosh, I love it.’”

Not only does dancing ward off dementia, it’s a “fantastic experience from the top of your head to the tips of your toes.”

Those Line Dancers will definitely be back to the festival next year, with the many families and partners for whom camping by the ocean and getting on a school bus to sing your heart out has become quite the tradition, regardless of the age or frequency of synth beats in the music, they’re just happy to get to see live.