Dancing to the power of women at Prismatic

Indigenous collaborators from around the world were moved to bring Re-Quickening to life. 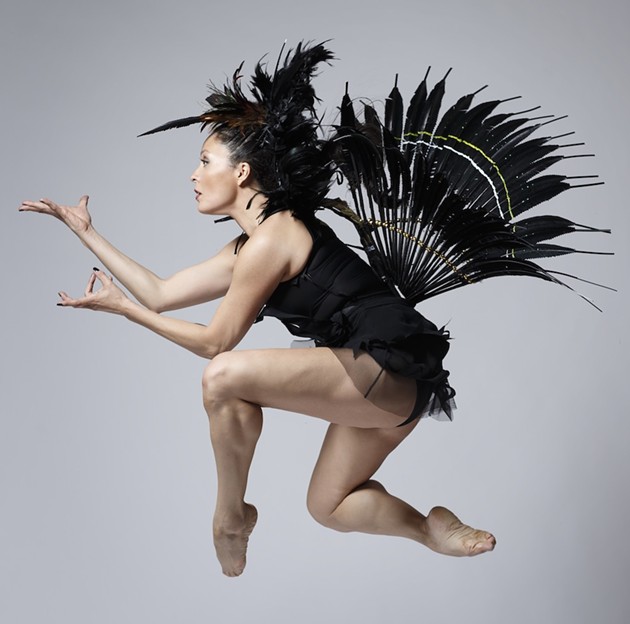 e-Quickening is the first moment a woman feels life in her womb," says Santee Smith. "When a baby starts to move and you feel that life, that is a term called 're-quickening.' In my Mohawk background we have a re-quickening address, which is about bringing people back to wholeness and wellness."

Smith is the artistic director of Kaha:wi Dance Theatre and the creator of Re-Quickening, being performed in Halifax as a part of Prismatic Festival and Live Art Dance. Smith is also a performer in the piece.

She founded Kaha:wi Dance Theatre in 2005. It's a Six Nations company based in Toronto, with a body of work that has toured extensively across Canada and internationally.

The creation of the piece has been a long time in the making, with Indigenous women collaborators around the world, from Australia and New Zealand, to Mexico and across Canada. The collaborative process began when they gathered together to talk about issues they face together as Indigenous women.

"We hope to reach a much larger audience," says Prismatic's Shahin Sayadi. "It's important for this great artistic work." tweet this

"The beginning of the process began with a weekend of women's talks," says Smith. "We just sat around the kitchen table and talked about where we are, where we find ourselves as women, and the state of Indigenous women across Turtle Island."

These gatherings included the artists Christi Belcourt, Leanne Simpson, Monique Mojica and Frances Rings, who have all contributed towards the final production of Re-Quickening. "We all talked about what we are doing as individuals to move towards wellness and healing, and the importance of the work we do as artists," says Smith.

More workshops and creation phases followed, taking place anywhere from Trinidad to New Zealand. It was in New Zealand that Smith met Louise Potiki Bryant, a Māori choreographer and video artist who joined the project creating the visuals for the performance.

"We all spent time in the land," says Smith of the time in New Zealand. "As soon as we got there we were in the waters, we were in tidal pools, we were in the streams. We connected with the land, and then came back to Toronto and continued creating. It's been a long process."

his will not be Santee Smith's first time in Halifax with Kaha:wi Dance Theatre. Her piece NeoIndigenA was featured in the Prismatic lineup back in 2014. This time around, Prismatic has partnered with Live Art Dance to bring Smith and her company back to Halifax. "We hope to reach a much larger audience," says Prismatic's co-director Shahin Sayadi. "It's important for this great artistic work."

Prismatic has a mandate to program work from a variety of fine art disciplines that showcase Indigenous artists and artists of colour.

"We need to see more of that," says Sayadi. "Our diverse communities need to see themselves reflected on our stages. Santee is really clear about her perspective as an Indigenous woman and how that translates onto the stage for her audiences."

Both Sayadi and Live Art Dance's artistic director, Randy Glynn, saw Re-Quickening when it premiered at Harbourfront Centre's 2015/16 Next Steps dance series in May of 2016, and worked together to bring the piece to Halifax. The partnership between the two organizations is something they hope continues going forward.

"I think it might change some people's expectations about Indigenous performance in particular.” —Santee Smith tweet this

Although she is quick to say that Re-Quickening doesn't address truth and reconciliation, Smith says "it really just speaks to truth." She hopes there are many frames of reference for experiencing the piece, but that the focus is on empowering women. "There are universal themes that are important and timely, and there are entry points for people in different ways. It touches people differently."

Smith also thinks that Halifax audiences will be surprised by what they see on stage in Re-Quickening. "I will assume that some people will see something they don't expect to see," she says with a laugh. "I think it might change some people's expectations about Indigenous performance in particular."

But as much as it is for a non-Indigenous audience to experience, the main impetus for the creation of Re-Quickening remains within the community.

"It is focused on bringing women back into their power," Smith says. "We want to reawaken ancient knowledge of women's processes, but also represent some of the reasons for the fractures in Indigenous women's lives and histories due to residential schools, due to imposed legislation like the Indian Act, and other institutionalized assimilative processes."

But more than educating and informing its audience, Smith wants the performance to be experienced rather than intellectualized.

"We've created a world that is very experiential," she says. "It really moves beyond an intellectual concept of what it is to be an Indigenous woman, to an experience that resonates with the body. "

For Smith, the performance is also a means of exploring pain in a way that leads towards healing. "The trauma, resilience and survival of the feminine spirit," she says, "are really what Re-Quickening is all about."