Jokes about smoking a peace pipe and concerns First Nations groups will want the keys to his house are some of the comments from the city councillor in over 500 pages of emails about Halifax’s controversial founder. 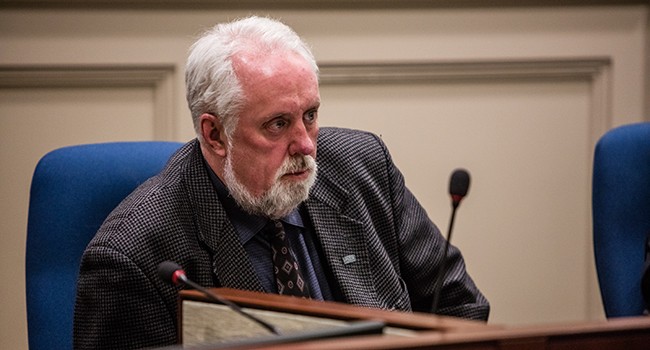 Days after calling Indigenous protestors “hotheads on the warpath,” Halifax Regional councillor David Hendsbee privately joked with his council colleagues about smoking a “peace pipe” and expressed surprise that the tarp the municipality used to cover the statue of Cornwallis wasn’t red.

The comments were made this past summer after hundreds of protesters gathered in Cornwallis Park threatening to topple the bronze statue of Halifax’s controversial founder. As a compromise, and to protect the monument from damage, the municipality arranged for Cornwallis to be briefly covered with a black tarp.

Some councillors were surprised to not be consulted on that decision.

“I was shocked to learn that council was not advised that HRM approved the covering of the statue and the use of an HRM truck to do it,” Tim Outhit writes in an email to his colleagues.

The comment prompted fellow councillor Waye Mason to ask for clarification. Hendsbee, in response, insists that “according to some it would symbolize blood.”

“Phew!” says Mason. “Because once again and because of recent word choices (bury the hatchet, warpath) I was worried you were talking about REDskins or similar. The issue now is recent word choice[s] makes folks suspect all your choices. I’m sharing this just as [] example of the slippery slope.”


The Preston–Chezzetcook–Eastern Shore councillor has been city hall’s most vocal defender of Cornwallis’ legacy—if not by votes, then certainly by outburst. While Stephen Adams and Matt Whitman—amongst others—have taken issue with council’s actions on Cornwallis, it’s Hendsbee who dominates headlines.

While calls to remove the statue and rebrand any civic infrastructure named in honour of a man who issued a proclamation for Indigenous scalps have increased in recent years, Hendsbee has over the same period publicly remarked that Cornwallis “might not have been perfect.” He also suggested the statue should actually be more prominently displayed somewhere on the downtown waterfront.

Hendsbee also interrupted the mayor during an acknowledgement about Aboriginal Day this past June in order to remind everyone that the date was also the anniversary of Cornwallis’ landing in Halifax Harbour.

Then, days before the planned protest on July 15, he appeared on News 95.7’s Rick Howe Show, where the called the event’s Indigenous organizers “hotheads on the warpath.”

After seeing the subsequent news story, Tim Outhit forwarded a screenshot of Hendsbee’s comments to the mayor and CAO Jacques Dubé.

“This is not helpful,” writes Outhit.

“When you use race or words that way—it is racist. You should seek cultural competency training man you are better than this.”

In defence, Hendsbee tells Mason that you can “pick any word and I’m sure it can be dissected any way one wants it to be.”

The councillor states that he grew up in a culturally mixed area and has represented the strong Black and Acadian communities in his district since 1993. Mason remained unconvinced.

“I cannot put aside thinly veiled unthinking racism for the sake of politics. You need [sic] get with the times.”

Hendsbee replies that he’s been “getting ‘with’ the times...except for this media is getting too cumbersome to keep up with.”

The dispute between the councillors is included in over 500 pages of emails and correspondence from over the summer between HRM officials and members of the public on the subject of Cornwallis. The documents were released to The Coast in a Freedom of Information request.

Included in the files are a flurry of exchanges between executives and communications staff once news of the planned protest reached city hall, along with the draft version of mayor Mike Savage’s July 11 statement calling for calm.

In that press release, Savage states that any action to remove Cornwallis’ statue would not be condoned by the Nova Scotia Assembly of Mi’kmaq Chiefs. The mayor also writes that Halifax police “will not stand in the way of legitimate public protest, nor will we condone action in the place of real dialogue.”

That was too soft for David Hendsbee.

“This statement does not go far enough!” responds the councillor.

Hendsbee suggests the mayor include language stating HRM will not condone any activity related to removing the statue unless it's sanctioned by the municipality and that any attempts to remove or deface the property will be seen as vandalism and will result in arrests.

But the councillor wasn’t just arguing with his fellow elected officials. Contained in the documents reviewed by The Coast is a lengthy email from a resident to HRM imploring Halifax to remove the statue of Cornwallis in recognition of the suffering endured by the Mi'kmaq people.

“A lot of truly horrific things have happened to the people who have been here for, literally, thousands of years...and we need to start the healing process,” the resident writes. “Please, do not let this slide. Let Halifax be known as the place that has the guts to look at its colonial past, to acknowledge the destructive horror that took place and to offer respect to the Mi’kmaq people by removing the statue.”

“Thanks [redacted] for your email,” replies Hendsbee, six minutes later. “I wonder how far to [sic] we go back to rectify this? Do we pass our keys to our homes and give them back to the First Nations to live in? We ALL are here today from the history of our past regardless of what path we eventually got here.”

“I’m not sure we need to ‘go back,’” the resident responds. “I think we need to go forward with open minds and hearts, looking for every way possible to acknowledge fully the pain and suffering colonialism brought to the inhabitants of this continent.”