Day 10 of the Fringe

The finish line is in sight 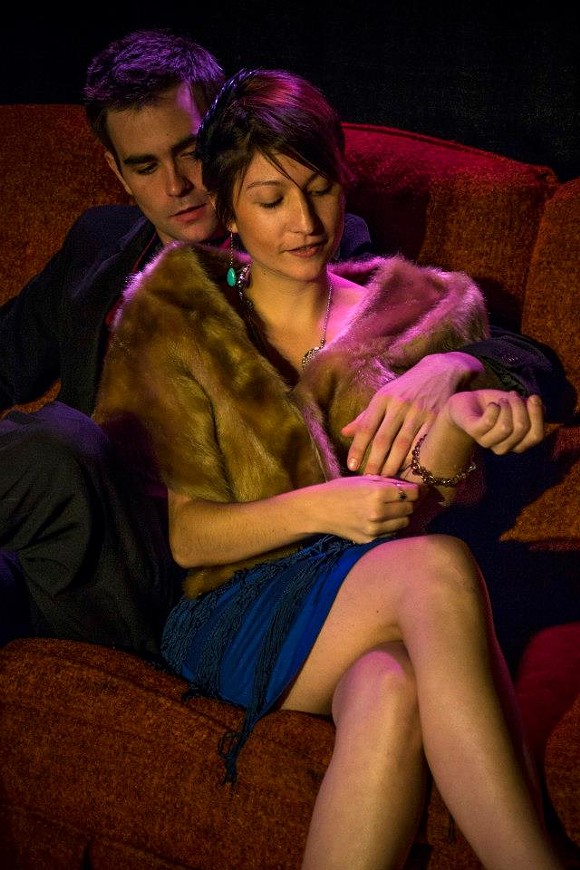 Despite the fact that Monument Valley is a dark comedy thriller in need of more laughs and more action, there's a kernel of something fascinating in its plot and writing style.

Jessica Pellerin plays a a surprisingly likeable killer-for-hire named May sent to dispatch a weakened old lady (Jozel Bennett). Along the way she has picked up a mysterious protegee (Kathryn Paige Reeves) who is anxious to learn the business and mechanics of murder.

There are some interesting plot twists in this seventy-five-minute play, but entirely too much dialogue. However, Delo writes with such an intriguing mix of the poetic and the repellent that it made me think this story could find a home on the page rather than on stage.

I really wish I'd seen Criminal Negligee at the beginning of its run, if only so I'd be still sharp enough to string together words that were even half as witty as this show is. You can't help but admire its clever wordplay and puns that are actually funny (Yes, there is such a thing).

There are brilliantly comic performances by Jimmy Jazz as an unbearably arrogant upper-class narcissist, Ira Henderson an insecure author distinctly lacking in a way with words, Genevieve Jones, Colleen MacIsaac as two prostitutes with smarts and sex appeal, and Keith Morrison in a delightful turn as a Tim Conway-esque butler.

Director Stephanie Kincade keeps the action brisk while still allowing each hysterical comic moment to be played for all its worth.

Help, I'm Having a Quarter Life Crisis by Danielle Doiron

You've heard the story before: small-town girl heads to the big, bad city in search of fame and fortune as an actor. She's beaten down along the way, but ultimately triumphs.

Danielle Doiron both celebrates and pokes fun at the stereotypical wanna-be actor in her sweet one-woman show.

The main character is painfully naive, and many of the laughs in the show come from her unrealistic expectations. (Want an agent? Just ask.)

Doiron gives a winning performance, but it is when she picks up the ukulele at the the end of the show and sings that she truly electrifies the audience, making me hope her next play will be about a singer in search of fame and fortune.

Needless to say, the world takes its toll on Birdie.

Actor Karie Richards brings to life an amazing woman —-a gorgeous soul—-who struggles to keep afloat, but who never gives up. Her story will make you smile through tears.

There is one show left for Birdy, and I urge you to go.

This play looks at the difficult topic of suicide from multiple angles. It explores the perspective of people who suffer in its aftermath, but also offers a window into the psyche of the victim herself.

Lisa Davison gives a haunting performance as Nell, a young woman who has been lured towards death from a very young age. The darkness that haunts her is expressed by visitations from "messengers", people from her past who urge her to end her life.

This is a quiet play with strong ensemble cast. Difficult to watch, but important.

Eric Hebert is very new to stand-up comedy and his show Undercover is in its infancy.

Its premise is that Hebert is a spy for separatist Quebec, exploring Canada with the view to gathering supporters for his cause. The humour comes from the us-and-them dynamic, and from the "Frenchness" of Hebert's language and way of expressing things.

While not exactly laugh-out-loud funny, Hebert is on track to creating an entertaining show.

There were moments that truly charmed in this melodramatic tale of life in an east coast fishing village set in the 1930's.

It's the story of two young fisherman, one blissfully in love and the other at war with his "trout" of a wife, who put to sea despite an impending storm. Their recklessness has unexpected consequences.

The un-named village is a kind of Peyton-place feel, and some of the sexual shenanigans (a creepy out-of-towner puts the moves on a sweet young girl in the most awkward way) and declarations of love (a minister offers his undying love to a wife in distress) are unlikely and thus unintentionally funny.

While you may have to suspend disbelief at times, this show is worth a look.

I've been harping on about how comedy preferences are such a personal thing, but I can't imagine anyone who wouldn't find the intelligent humour in this show funny.

Bill Woods has the audience eating out of his hand from the moment he appears on stage crumpled beneath a lawn chair and a mass of colourful balloons. (Now here's an image for you.)

This hour-long show begins with a gorgeous fable and rockets through vignettes as diverse as a school where children busk for popularity to a not-too-distant future where the internet has replaced God.

You'll find them all in Bill Wood: Pissing From Windows.