Dartmouth Players’ Count Dracula uses effects and cheesy lines to deliver on the chills and laughs. 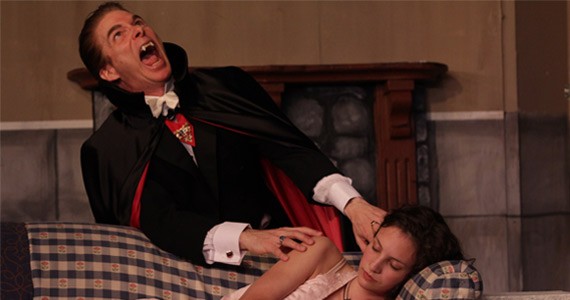 Although Count Dracula is a comedic version of Bram Stoker's Dracula, that doesn't mean it's without suspense. Thanks to some effective sound effects (such as the distant howl of dogs and suitably sinister music) and some pretty nifty special effects and lighting (like the eerily-lit fog, a creepy, careening bat and a stunning entrances and exits by Dracula) this play offer some real thrills. For most the part though, it's a tongue-in-cheek send-up of the well-known original. Valerie MacKenzie positively chews the scenery as a female version of the vampire-hunter Van Helsig. Russell Storer plays it fairly straight as the un-dead count, delivery cheesy lines with a great Transylvanian accent and a twinkle in his eye. But it's Brian Fewer who steals the show as the acrobatic Golum-like madman Renfield. The play is overlong and drags in Act ll, but it definitely delivers on chills and laughs.