That's a lot of halves 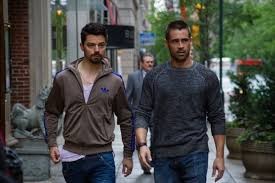 Colin Farrell continues to act in movies, what with his new revenge drama Dead Man Down. A low-level gangster with a secret, Farrell is on a one-man mission of vengeance when his plans get disrupted by an emotionally and physically scared neighbour (Noomi Rapace) with plans of her own. Terrance Howard also shows up, utterly unmemorable as a beleaguered crime boss. Directed by original The Girl With The Dragon Tattoo director Niels Arden Oplev, and somehow produced by WWE Films, Dead Man's cluttered tones have a habit of disrupting any momentum moving forward. It's half-superhero-like revenge fantasy, half-psychologically wounded love story, and half-gangster detective show. All three elements of which would be engaging enough, but the rapid gear changing tears out the film's transmission. Less would have been a hell of a lot more here.

Dead Man Down is not showing in any theaters in the area.