Actions of solidarity across the country as raids echo what’s happened in the past to Alton Gas protesters. 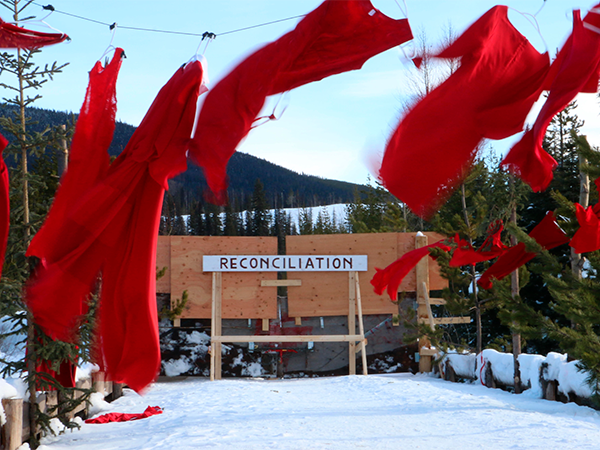 Since last week, the RCMP has been executing almost daily raids and arresting Indigenous land defenders on Wet'suwet'en territory in BC, enforcing a court order to remove people from the land granted to Coastal GasLink for its pipeline construction.

Since the raids began, people in Halifax have been taking action—at MP Andy Fillmore's office and local RCMP headquarters, in the HRP building on Gottingen Street and blocking the Fairview Cove Container Terminal—part of a wave of actions across the country that have been held in solidarity with the land defenders, organized at their request.

"Seeing the news really hurt me and I just felt like I had to do something to bring attention, because I'm a visitor in Mi'kma'ki," says Naomi Bird, an Indigenous youth organizer from Treaty 6 territory on the Prairies, of the solidarity action in Andy Fillmore's office. "In any other situation," they say, "like if you were at someone's house, there would be certain things you try to do to show respect and kindness, so sitting by, watching this happen and thinking that it doesn't affect you or impact you in the short run, is like being a bad guest. And, I mean, once the house starts burning, it's going to affect you, too."

The present situation in Wet'suwet'en territory echoes the raid there in January 2019 where 14 Indigenous land defenders were forcefully arrested. Documents released later showed that the RCMP had been granted permission to use lethal force. At least three of the commanding officers who led last year's raid are coordinating the currently unfolding raids, and witnesses of the arrests that have happened over the past week have said RCMP officers had weapons drawn despite none of the land defenders being armed. Information about the unfolding raids is somewhat lacking, however, as the RCMP has been preventing journalists and legal witnesses from getting close.

Last spring on this side of the country, three Mi'kmaw grandmothers and water protectors were arrested while resisting the Alton Gas project near Stewiacke. The project would create natural-gas storage facilities out of salt caverns and, in the process, dump salt brine into the Shubenacadie River. One of the water protectors, Darlene Gilbert, says with Alton Gas and Coastal GasLink pipeline, "They're arresting people on our own lands and they don't have consent. The government needs to start listening to our people."

The Delgamuukw-Gisday’wa court case, won in 1997, affirmed by the Supreme Court of Canada that the Wet’suwet’en people, as represented by their hereditary leaders, never ceded their rights and title to their territory. Gilbert and the other grandmothers arrested at the Shubenacadie River are fighting their case against the injunction based on the 1752 Treaty of Peace and Friendship with the Crown, which does not include land surrender.

Whether on Wet'suwet'en territory or here in Mi'kma'ki, arresting Indigenous people for defending their unceded land is hard to reconcile with the government's promises to work toward reconciliation. "I don't see reconciliation in militarized police coming in and forcing people off of their own land," says Bird. "I don't really believe in reconciliation, I think it's this word that no one really understands and they use it to suggest that they're working towards peace. But I think, from the government side, it's working towards neutralizing Indigenous sovereignty."