Hip-hop supergroup Deltron 3030 bring science fiction with a classical side, headlining the Halifax Jazz Festival with tracks from their upcoming sophomore record, Event II, an album that has been ten years in the making. 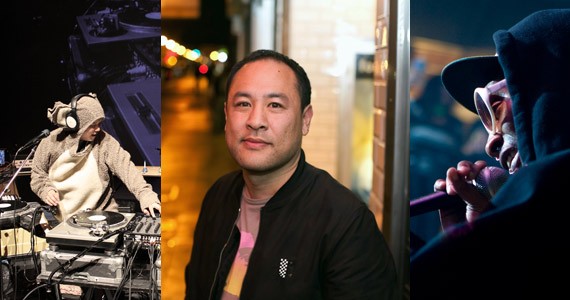 When Canadian DJ Kid Koala (real name Eric San) was asked by record producer Dan The Automator (Daniel Nakamura) and legendary Bay Area MC Del the Funky Homosapien to join their sci-fi hip-hop project in early 1999, he had no idea the impact Deltron 3030 would have on the music community more than a decade after the album's original release.

"I kind of live in a little bit of a clueless studio bubble sometimes," says San. "You just kind of do the stuff you want to do and hope other people will be interested in it."

But after 12 years of silence, seminal hip-hop act Deltron 3030 return this month, headlining the Halifax Jazz Festival, and bringing with them tracks from their upcoming sophomore record, Event II, an album that has been 10 years in the making.

The group began during the production of Nakamura's Handsome Boy Modeling School, which Kid Koala and Del were both guests on. Nakamura had begun production of what would become Deltron 3030, with Del already completing the bulk of the verses on what San describes as a "post-apocalyptic future-past record."

Intrigued by the "scope and grandeur" of the project, San signed on, adding scratches, samples and engineering to Nakamura's arrangements.

Around the time of recording San was also asked by Nakamura to come aboard Damon Albarn's new recording project, Gorillaz, which all three members of Deltron would end up working on.

When Deltron 3030 was released on May 23, 2000---followed closely by the self-titled Gorillaz debut less than a year later on March 26---pop music would never be the same again.

Both albums seamlessly blend hip-hop, modern pop and punk rock into easily digestible 21st century masterpieces. But it was the "bleak but triumphant" Deltron 3030 that captured the hip-hop community's attention, with Del's poignant thoughts on technology and corporatization cementing him as rap's answer to Marshall McLuhan.

The group reached a mythical status that only grew as speculation arose about a possible follow-up to hip-hop's greatest opera.

"Maybe because we only did 10 shows people were like, 'Wait, what?!' People assume just because something caught on you're going to do it for the rest of eternity," says San. "But as artists you always have to be digging new places.

San would continue DJing, opening for Radiohead throughout 2003-2004, performing with Montreal jazz group Bullfrog, creating his own solo records as Your Mom's Favorite DJ, drawing comic books and even hooking up with the rhythm section of Wolfmother to record as The Slew. But, rumours still emerged about what the future might hold for Deltron 3030.

Recording for the follow-up album, Event II, began as far back as 2002, but were more sketches than fully realized songs.

"I remember it was early as two years after the first record we began working on it, and not much of that has paid off," he says, laughing. "Those were still kind of studies. Most of what has made it on the record now was stuff we've done in the last three years."

The time spent between recordings was mostly due to the refinement and patience Del took to the lyrical construction for the follow-up to Deltron 3030. Described by San as "the Orson Welles of hip-hop," Del began writing the lyrics that ended up on the album mostly over the past few years.

"At one point it went on the front burner and after some tours Del said 'OK, I'm ready to do Deltron.' It was percolating and then all of a sudden it reached that critical point," he says.

According to San, it was well worth the wait. "If anything Deltron is a way for us to do a commentary on today, but by setting it that far in the future it enables us to take more liberties," he says. "You'll hear in his lyrics that what he's talking about is the future, but really most of those things are happening now. It's scary how close it is."

San says that he and Nakamura "flexed" their "classical side," delivering ornate compositions and classical cuts to give Event II a similar grandeur to the previous record. But where Deltron 3030 was considered a down-tempo masterpiece, San says that Event II will have a few more upbeat tracks.

"It has an urgency to it that I enjoy. On the first record I think we only had one or two songs that had that tempo and mostly just kicked back, but this one, I don't know, it's weird," he laughs. "It's kind of like some bizarre techno western."

Since the release of Deltron 3030, the often-rumoured follow-up album took on an air similar to the release of Guns N' Roses' Chinese Democracy: the album was expected to be a masterpiece...if it ever came out. But San says fans of the group shouldn't be worried that they may not like the new album.

"I'm not alone in saying I think Event II is a way more realized recording," he says. "With this new Deltron it was a very concerted effort to level up on every aspect of it. The first record really was an experiment. It was the first time we worked together, first time we toured together. Actually knowing what everyone could contribute to it helped figure out how to utilize everyone's abilities."

San says that those attending the Halifax show should be prepared to hear the bulk of Event II performed live in concert, but promises cuts from the original album will definitely be making it into the set too.

Twelve years on and only a few months away from Event II's September release, San says he understands the impact Deltron 3030 had on the hip-hop community, but is ready to take the next step.

"It's kind of like Bladerunner or something. I just think for some people it made sense to them. They're always going to cite it somehow," he laughs. "It happened when nothing else happened and gave you a glimpse of the future." --Matthew Ritchie