A mixed-media exhibition at Lost & Found gets it's inspiration from a busted iPhone and the death of a billionaire. 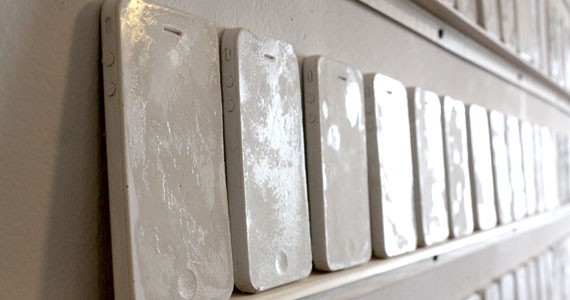 On October 5, 2011 Derrick R. Dixon bid farewell to his seven-day-old shiny new iPhone 4 after he accidentally dropped it into the toilet. Hours later the world bid farewell to the man behind his ill-fated device, Steve Jobs. And so began Dixon's Planned Obsolescence, with a bronze cast of the departed phone, repackaged and rewrapped, as a sort of memorial for Jobs. "This experience got me thinking of the ideas of planned obsolescence, being that these technologies are designed with a limited life and then applied those ideas to human life in general, and what one aspires to during that limited time," says Dixon of the exhibit, which also includes a wall of stark, white plaster iPhones, a printed matter book (Portraits From A Lonely Place/Curiousity) exploring the desire for human connection and Hot Damned, a portrait series of artistic greats who passed too soon. Like the iPhone itself, this collection of works packs a lot of meaning into a clean, simple package.