Developments would be towering over the Common

Plans for Robie and Quinpool corner dwarf their neighbours. 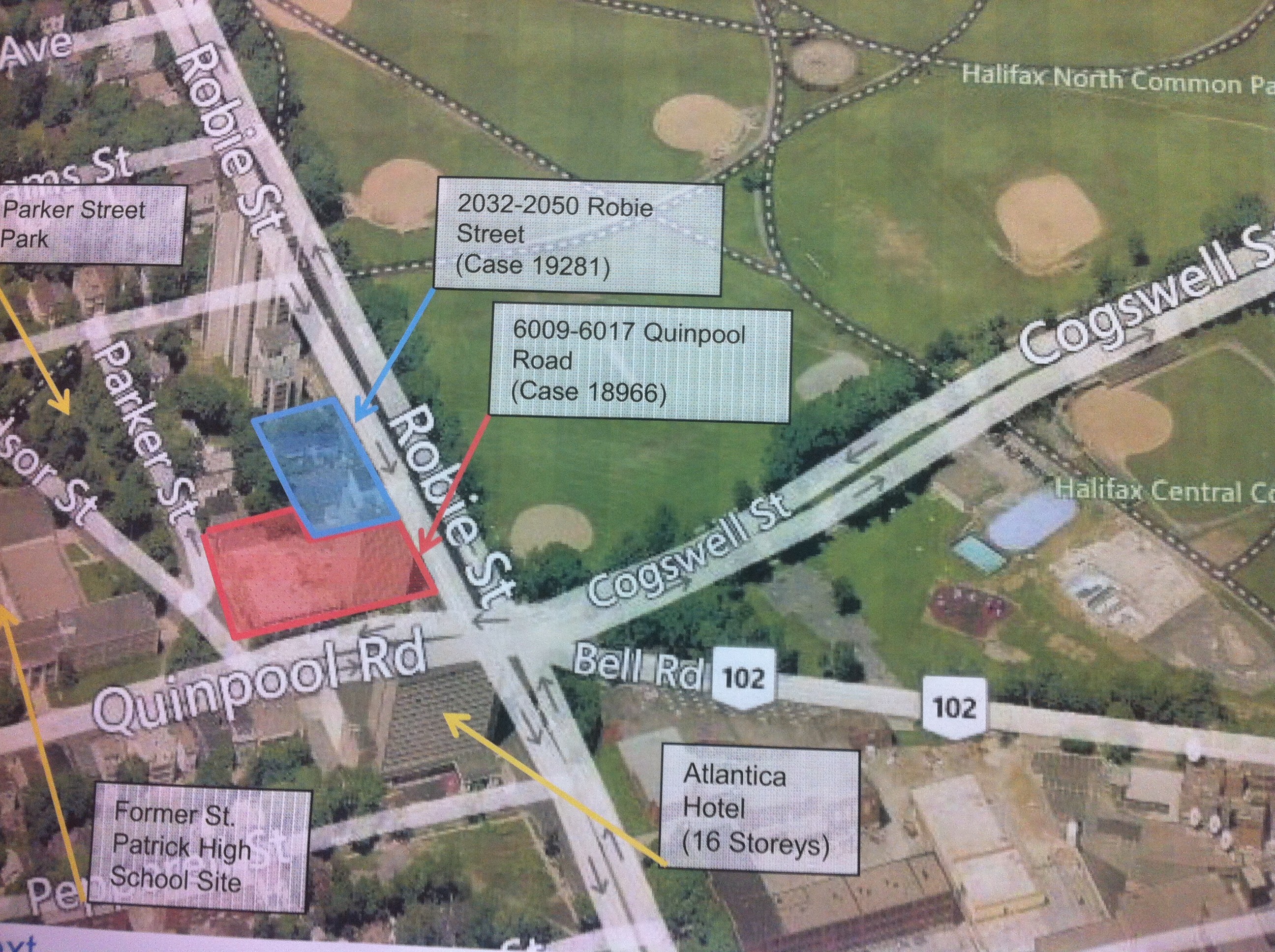 Two closely-linked developments at the intersection of Robie Street and Quinpool Road are currently working their way through the municipal planning process labyrinth. It’s early days, but what’s being proposed could dramatically alter one of Halifax’s most visible corners.

The Armco-owned APL Properties Ltd. is trying to build two towers, 12 and 28 storeys, at Quinpool and Parker Street. Right now, that spot houses a four-storey parking garage and a 10-storey office building. The current allowable height for the area is five stories on the western side and 14 on the east. What’s being proposed by APL is double the legal limit and three times the size of what’s in place now.

Obviously, it’s a bit of an increase.

“You look at what’s existing and what’s coming in the near future,” says Daniel Chedrawe with Westwood. “We felt this site really is conducive to higher density, higher heights. If a tall building here is not suitable, where is a tall building suitable in HRM? There is no other place.”

As a comparison, the Atlantica Hotel across the street on Quinpool is only 16 storeys high. As a better comparison, the house right smack dab behind the Armco property is two. It’s a ridiculous lack of transition between what’s in the community and what’s being planned. The proposed developments are going to dominate everything around them.

Or they will for right now. The way Chedrawe talks about it, Westwood (and likely APL) are banking on the upcoming sale of the former St. Patrick’s High School property next door. Whoever buys that site will want a large development of their own, and they’ll probably get it. Considering the money the city is spending on fixing up the space, it’ll want a return on its investment.

The St. Pat’s site, and the APL/Westwood developments, would by their very existence ratchet up the size of any future proposals. Suddenly, it’ll be the residential homes and smaller commercial structures that no longer meet those transition guidelines—that no longer belong in the neighbourhood.

A 2013 Stantec study prepared for HRM concluded there was already sufficient development capacity in the region to meet the city’s density targets. Meaning the current height allowances are still applicable to the ever-important idea of peninsula densification. The corner of Quinpool and Robie can be a thriving centre of life without having to blow up and redo the entire neighbourhood.

Chedrawe is right about one thing, though—that’s an ugly corner right now. No one’s going to argue one of most prominent, visible intersections in the city is best served by a soggy grey eyesore and an abandoned funeral home. But having a nice building doesn’t necessarily mean having the most building.

It’s likely why HRM staff highlighted so many concerns with the proposals in their report. Some, like shadows on the Common, seem silly but are important considerations. Westwood did take steps to alter their plans and create a narrower, taller tower in response. Chedrawe told me at the first of many public meetings on the project that taller and narrower buildings surprisingly produce less of a shadow than shorter, wider structures.

You’ll recall that Armco’s APL took a different tactic with staff’s recommendations, politely telling HRM to both sit on it and rotate.

Westwood and Armco seem to think they’re doing a service, dragging the city up by its zoning bootstraps. But Chedrawe doesn’t see it that way.

“We have one chance to do it right, and we don’t want to do it wrong,” he says. “It’ll be there for generations to come, and when I’m gone from here I don’t want to be looked back at as a terrible developer.”

You have until the end of the week to let HRM know your thoughts on the proposed developments via an online survey (available here). After that, the city will review the public’s input, hold more meetings, and eventually either approve or reject the development agreements (individually or in tandem).