Dip it good at Baba Ghanouj

Baba Ghanouj Cafe, downtown’s new source for Syrian cuisine, has room to improve, but its namesake dip is absolutely perfect. 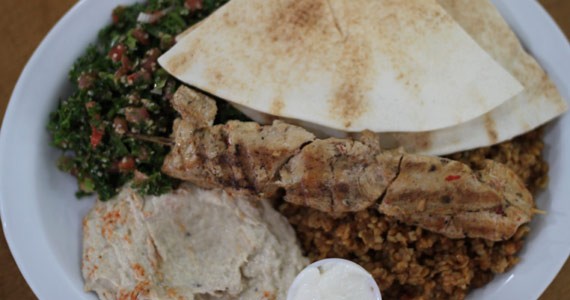 Baba Ghanouj is adorable. It's hard to miss the new restaurant on Barrington Street—the chalky white walls are painted with green accents and a couple of cute tables flank the door. It's bright and welcoming—you can't help but want to go in.

Unfortunately, the charm of the outside is a bit lost once inside. Two soccer games are playing on two television screens in the dining area. One of the screens blares in the background, switching back and forth between sports announcing and advertisements. Sitting in the cafe, which is made up of a scattering of tables and a small area with a plush sofa and chairs, is akin to sitting in someone's house while they watch something you aren't interested in.

The other half of the restaurant is made up of the open kitchen and counter area, which has a big vegetarian buffet station and a display case with an assortment of desserts. There is also a coffee stand with Van Houtte coffee urns. It's hard to tell what the focus of the space is: it reads sort of like a cafe, but the coffee seems to only be served in take-out paper cups. The menus are on TV screens behind the counter. It seems like they likely specialize in take-out. There is no table service.

At the counter, I ask for recommendations. I'm not given any; the server simply says "it depends what you like." When pressed, she claims no specialties and instead just waits for me to choose.

So I start with the shakshouka ($7), which is one of my favourite Middle Eastern dishes. I ask a bit about how it is served as an appetizer, wondering if—assuming—it's just one egg poached in a spicy sauce of tomatoes and peppers. It isn't. In this variation, eggs are scrambled instead of left with a whole yolk, and there is no sauce, just a mix of sliced tomato, onion and peppers. Still curious, I order it. I also get a chicken kebab plate ($14).

The lack of bright spiciness in the scramble makes me think more of menemen, a similar Turkish dish, but the lack of a fragrant sauce or even tomato paste leaves the dish far from what I was hoping for. And even as simple scrambled eggs the dish is left wanting with very little in the way of seasoning or finesse.

Only a few bites in, I am beckoned back to the counter to pick up my kebabs. I abandon the bland shakshouka for the huge entree. The plate is lovely: a generous kebab, a clutter of tabouli, a burghul tomato pilaf, pickled cabbage and baba ghanouj and a fan of pita bread.

Aside from the disappointing kebabs—they have a nice flavour, but the chicken is very dry and sinewy—the plate is delicious. The burghul (AKA bulgar) has a warm nuttiness, which is wonderful with sweet tomato and nutty chickpeas. Vibrant, zesty tabouli makes for a nice accompaniment.

But the real star of the plate is the baba ghanouj. There was keen insight in naming the restaurant after the dish: this is one of the best eggplant dips I've ever had. A buttery, silky dip, the flavour flutters from earthy and nutty to smoky, bitter, tart and bright. It's addictive.

There are hints of possible greatness here, evidenced by the perfect baba ghanouj. I hope to see the rest of the lovely Syrian menu develop as much flavour as time goes on.