Shivani Dhamija experiments with her own take on street food and serves up “Indian burritos.” 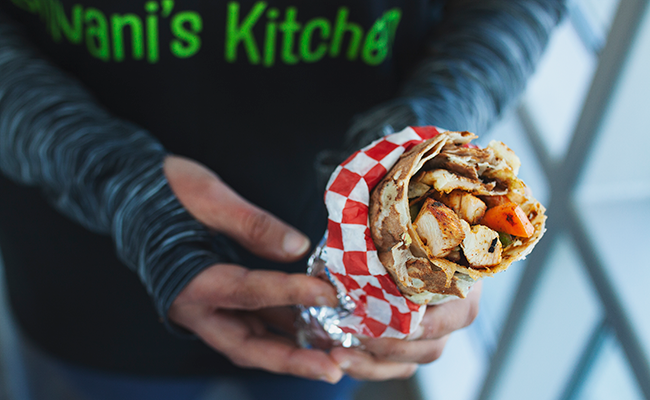 Fresh naan, still warm and doused in garlic butter, is a staple in Indian cuisine and Shivani Dhamija is intent on taking the pillowy flatbread to the next level. At her restaurant, Shivani’s Kitchen in the Seaport Farmers’ Market (1209 Marginal Road), you can now pick up a handheld naan roll stuffed with cumin potatoes, green chutney and a protein of your choice: Sausage; chicken tikka; bacon and egg or paneer.

A take on fusion cuisine, Dhamija has nicknamed her new naan rolls “Indian burritos.” Inspired by a popular Indian street food called “,” Dhamija wanted to offer something that customers could easily munch on while they explored the market. “I always wanted to make fusion dishes,” she says. “Usually, you have to sit and eat Indian food, but this is a quick-serve option.”
Originating in Mumbai, consist of either a paratha or roti stuffed with a selection of traditional fillings—from tikka to aloo to paneer. For her version, Dhamija decided to use tandoori naan.

Customers at Shivani’s Kitchen can watch Dhamija as she practices the traditional method of baking tandoori naan. After forming the dough into an oval, she presses it against the inner neck of the tandoor where it rests suspended over a charcoal fire. After a few minutes, she gently slips the naan off the oven’s wall with a metal hook, and then it’s ready to be served.

While the chicken tikka and paneer rolls provide a classic blend of Indian flavours, Dhamija created the sausage and bacon and egg options to cater to early-morning market-goers. But if on Saturday morning is too early for you, Shivani’s Kitchen is open Tuesday to Friday until , and Sundays until . Along with her new naan rolls, Dhamija also offers a selection of curries, tandoori , vegetables, samosas and pakoras—all available for delivery.