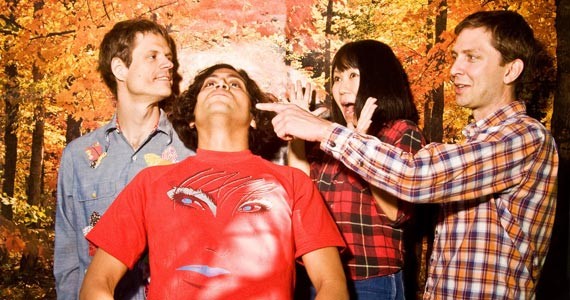 It's hard to believe that one of Canada's best music festivals could get any greater but believe it, baby: Evolve 2012 is going to blow the confetti right out of you.

Now in its twelfth year, 100 acts from across the world will be in Antigonish for the three-day eco-focused tent and stage mini-city.

"Over the last couple of years," Aucoin says, "I've seen so many great people at the festivals I've played, so I made a list of the bands that would go over really well at Evolve, and I put it forth," including American electro-guru Dan Deacon. But it's not just the seriously stellar lineup and the personal enviro-awareness workshops that will help awaken your consciousness. There's more.

This year, special effects wizard and confetti-cannon creator Tyrone Reveen of Streamer Effects International is going to turn the festival up a few neon notches with lights, lasers and completely magical audio-visual experiences. "There are tons of surprises," Aucoin says, planning a show like never before. But the biggest surprise of all, will be how much fun you'll have.

"Evolve is super laid-back. You can see a lot of great music, surrounded by friends, while also camping in a beautiful setting; it's the most stress-free festival that exists. It's so fun to be a part of."

And Evolve is committed to its community, with consumption and waste reduction policies, a bevy of vendors and events and its social awareness mandate, which also makes it one of the greenest festivals, true to its grassroots origins. Campers are encouraged to connect to the earth and to each other, and to evolve together through music and streamer cannons like you've never seen.