Doctor who? Meet the saviour of HRM's clocks 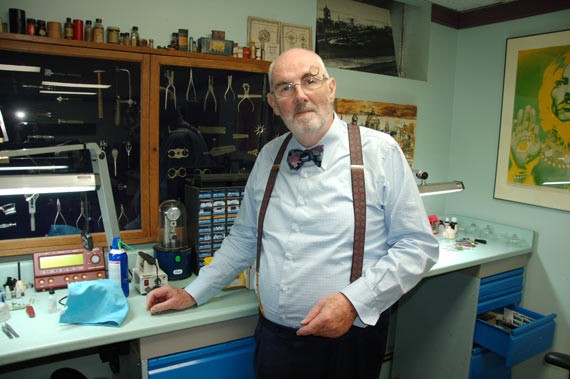 Dartmouth is a timeless land—unfettered by chronological confines, adrift in the void.

That town clock by Alderney Gate is busted.

Spokesperson Jennifer Stairs says HRM was made aware of the temporal malfunction in early October. The drive mechanism inside has failed and needs replacing. As happens whenever a timepiece needs maintenance, the municipality has once again turned to Doctor Clock.

Doctor Clock, AKA David Francis, is the horologist who services all of the city’s timepieces. Francis and his team will be building a new drive system for the machine over the next few weeks. They hope to have time restored to Dartmouth around mid-December.

“Every one one of these is a unique job,” Francis says. “There are other four-sided street clocks around, maybe, but all of them have their own idiosyncrasies.”

Doctor Clock has serviced the Alderney Gate timepiece since it was first installed in 1988. Twice a year someone from the shop would go out and manually reset the hour for Daylight Savings. Once it’s repaired, the clock’s new multi-drive system will automatically update the time and keep the clock working during power outages.

Francis says no one will notice the difference inside, but the retrofit is long overdue. “We’re not driving crank-up cars anymore,” he says. “We’re just going to bring the thing into the 21st century.”

Over the past two years, HRM has spent $7,100 on maintenance and parts for the Alderney Gate clock. That doesn’t include any costs related to repair work over the next few weeks.

According to Doctor Clock, the size of a clock makes no difference in how it’s repaired.

“She’s either tall or she’s short,” he says, “but all the parts are the same.”