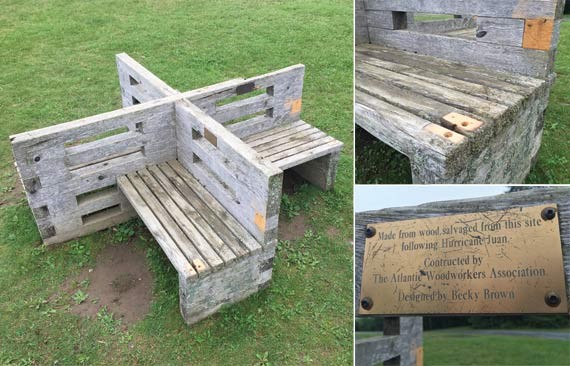 Sometimes, it's not only beauty that is in the eye of the beholder.

Years after a bench in Point Pleasant Park was built with wood from a tree (or trees) uprooted by hurricane Juan, Halifax city hall last month altered the seating unit because a park user complained it resembled a swastika.

The installation was designed by Becky Brown, who was the co-winner of a competition to create benches after Juan hit the Halifax region in 2003 and knocked down tens of thousands of old-growth trees in the park. Her thought-provoking design was placed on a grassy area near the Prince of Wales Tower, a national historic site.

It was fashioned as a modular unit and assembled with wooden seats, backs and armrests. Brown, of Bridgetown, was one of two Nova Scotians who, according to the Atlantic Woodworkers Association, captured the design contest prize after Juan devastated the park.

Elliott says Brown wasn't notified about the bench's arms being sawed off in response to the complainant's call about the piece looking like a swastika, the symbol Nazi Germany used during its 12-year rule.

The swastika is commonly associated with the genocidal Nazis, but its hooked-cross motif is thousands of years old. Passersby wouldn't have necessarily recognized the symbol from ground level, but it could be seen when standing on the bench and looking down.

Brown couldn't be reached. Stan Salsman, a spokesperson for the woodworkers' association, tells The Coast she was a student at the time of the contest. He acknowledged the swastika issue arose while the bench was being built, so alterations were made.

"We didn't want to spoil the design, so we just lowered the [armrests] down. They were up at back level, which made it really quite prominent. Then we lowered them down to a few inches from the seat," Salsman says.

Elliott says the bench is showing its age and is probably going to be replaced next year. In the meantime, its armrests were taken off in response to the single complaint that was received.

"The caller did not indicate they were complaining on behalf of an organization," Elliott writes in an email, after being asked if the complainant was acting alone or as someone representing an association. A senior official with the Atlantic Jewish Council said the bench didn't ring a bell with him.

Benches built from trees floored by the hurricane's hellacious winds are at various sites throughout Point Pleasant Park. They include small plaques crediting the designer and telling users about the units' connection to the storm. The one Brown designed has a plaque on each of its four sections, saying the bench was constructed by the woodworkers' association.

For about a decade, countless joggers, dog-walkers, cyclists and others have passed the offending bench with nary a critical comment directed at municipal staff. The most intriguing feature for many users, who may never have noticed the shape of the thing, was that material salvaged from Juan was used by area woodworkers.

Now, when visitors reach the bench, they'll see the left-side armrests that used to be connected to the front of each section's seat and the rear are instead cleanly cut at the back portions of the unit.

What was the bench's swastika shape now looks more like a simple cross.