Dog Day: Beyond the Fade

Dog Day’s latest, Fade Out, is on their terms. Dark, beautiful, elegantly nuanced and noticeably larger. 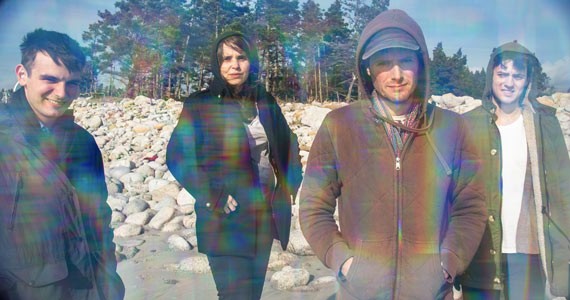 "Someone asked me where we got our name and I was looking up the definition of 'dog day,' cause I actually didn't know, and it said 'a period of inactivity,'" says Seth Smith. "I was like yeah, that sounds about right."

He laughs, but he's being modest. Dog Day has been releasing cracked-pop records every other year since 2005, first as a four-person combo and since 2011's Deformer as the core duo of Smith and Nancy Urich, who pre-date Dog Day as bandmates (in Burdocks) and life mates (they're married). Amidst relentless touring all over North America, Urich was a producer on Smith's film Lowlife, a festival circuit favourite last year (he also composed the soundtrack), and they were two of the organizers of last month's Outlier Film Festival. Smith is a designer, Urich an administrator. They're the indie-rock Coen brothers---each has a set of credits, but both do everything. A baby is imminent.

First there is Fade Out, the excellent 13-song album they've been working on for a year and will release Saturday at the Marquee. "We took kind of a scrapbooking approach where we just did it whenever we had free time," says Smith over coffee and peanut butter bagels in the north end, a few minutes before he's due to work Yorodeo's table at the holiday crafters' market. "It was a song a month," says Urich. "Until May, and then it was two songs a month."

The pair recorded the album in a room in the country house they bought a few years ago near Sambro, where they keep chickens and work on art. "It's really nothing fancy, it's mostly garbage," says Smith of their studio set-up. "It's easy to record digitally now---we like to run elements through different pedals and old stereos just to muck it up a bit, you know? I see recording nowadays kinda like CGI in movies---it can be helpful but if you just rely on that, it looks a little cheesy. So it's nice to use analogue methods as well to get a nice rounded sound."

While Deformer wasn't stripped-down, exactly, the sonic palette of Fade Out is noticeably larger. "I played all the drum tracks but I also played probably half the bass tracks," says Urich, "and we both played guitar on some songs, and I did keyboards." The concern of being two people trying to create the sound of more live is gone, since Dog Day as touring unit has gone back up to four parts, with Mark Grundy on bass, Urich moving from drums to guitar and Seamus Dalton taking her place.

"Guitar is my real instrument that I actually know how to play," says Urich, who originally handled bass duties.

"It's fun to have some duelling solos with your wife," says Smith.

Throughout its career Dog Day has had a bunch of the close calls bands need to encounter in order to break through to a larger audience. There've been reviews in high places, shows in cool venues, a German label, a trip to John Agnello's studio, showcases at key festivals, buzz buzz buzz. Now working alone (save a distributor), with a baby due, they're over it all.

"It's nice having a team too, but you get sick of people being like 'You gotta play this showcase at North By Northeast because the guy from Bing Bong Records is gonna be there,'" says Smith. "And you're like 'I don't care.'"

"They don't realize how much work it is for you to go all the way to that place, sit there and wait for Bing Bong to come," says Urich, laughing, "and you talk to him and you're loaded by that time."

"Dog Day's always been a bit of a hard sell to some people," says Smith. "I feel like it's a little too dark or gloomy for people that generally like pop music." "And not punk enough for the punks," adds Urich.

Fade Out is mostly upbeat songs packed with riffs (including some duels), steady beats, harmonies and Smith's mostly downer lyrics. "This record is almost like a lost tracks/b-sides kind of album," he says. "It's a lot of songs that never made it to records that were still pretty good songs."

There's also a tasteful sprinkling of elegant nuance, from the distant piano notes on opener "Blackened" to the shaker on "Joyride" and the gorgeous, subtle cymbal crashes on "Before Us," the record's deceptively beautiful final track.

"We just got a review that was like 'All the songs are super-dark but at least they have a happy song at the end,'" says Smith, laughingly confirming that the refrain is "As we lay here to rot." "I don't even see that as a happy song, but maybe."

Dog Day, four parts, will do a release tour for Fade Out and then it's back to the country for Urich and Smith, who welcome but won't chase opportunities. "We definitely won't be heading to Toronto to play CMW for Bing Bong," says Urich. "I wouldn't be opposed to playing an amazing show. But we're also not pursuing anything. We're just gonna take some time---we don't know anything about babies, so we have a lot of learning to do."

"There's definitely music in the future. With this album and that title, Fade Out---it felt like a nice bookend record," says Smith. "But I didn't want to leave it as our last album. It doesn't feel like an ending, a fade out in a song---it feels like it's moving elsewhere and you're kinda just stepping back. It's going in a different direction."

A Preview Of Fade Out from Seth Smith on Vimeo.